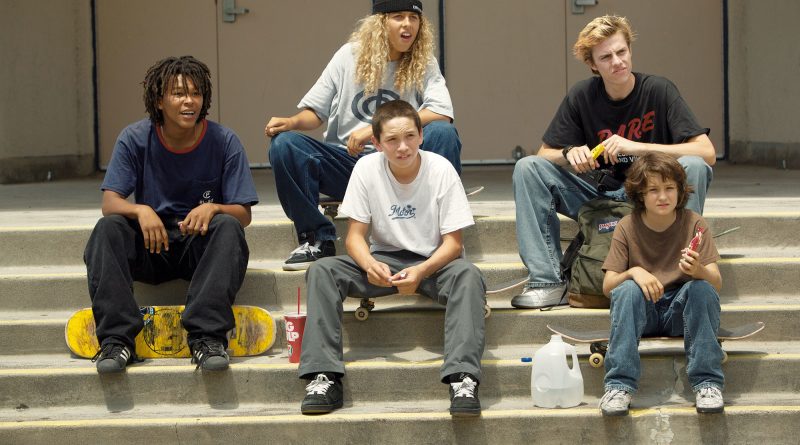 Actor-turned-writer/director Jonah Hill has crafted a street-smart, mid-‘90s memory piece about the early days of a pop phenomenon: the sub-culture sport known as skateboarding.

Life in Los Angeles is not easy for vulnerable 13 year-old Stevie (Sunny Suljic), who is bullied by his older brother Ian (Lucas Hedges), whom he idolizes, although Ian beats Stevie up regularly. And Stevie, understandably, feels alienated from his self-absorbed, single mom, Dabney (Katherine Waterston), who had Ian when she was 18 and hasn’t matured much since.

One summer day, Stevie spies four punks going into the Motor Avenue Skate Shop. Following them, he pretends he’s shopping for a T-shirt while surreptitiously listening to what they’re saying.

Slowly, he edges into their midst and is acknowledged by Ruben (Gio Galicia), who sells him an old skateboard. When Stevie expresses his appreciation, Ruben chides him: “Don’t thank people because they’ll think you’re gay.”

Dubbed ‘Sunburn,’ Stevie is eventually accepted by this rowdy tribe, including ‘Fourth Grade’ (Ryder McLaughlin), whose nickname indicates the level of his intellect; loudmouth’d ‘Fuckshit’ (Olan Prenatt), whose language skills seem nonexistent; and their ringleader, Ray (Na-Kel Smith), an African-American who dreams of going ‘pro.’

The teens’ performances are utterly convincing, although Suljic is the only one with a professional background (“The Killing of a Sacred Deer”).

Plus, there’s an authentic period soundtrack ranging from The Cure to Wu-Tang Clan, scored by Trent Reznor and Atticus Ross.

Unfortunately, however, the film ends somewhat abruptly, instead of offering a satisfying conclusion.