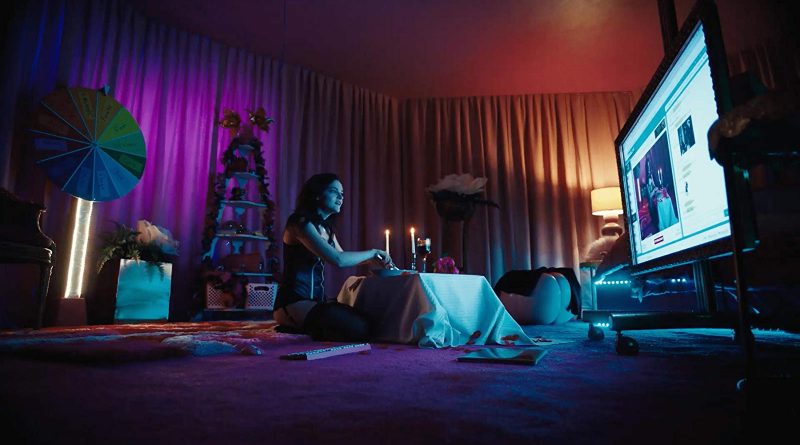 As the central character Alice (who performs under the name Lola), Brewer adds a charm and depth to a character who could so easily slip into cliché and hollow parody. Known primarily for her work on the small screen – Orange is the New Black and The Handmaid’s Tale in particular – Brewer shrewdly presents Alice as a thoroughly likeable young woman whose decision to work in the sex industry is from the outset never dismissed as a fault or a flaw; it is a conscious decision she has rationally made, and Brewer’s “Lola” is clearly a role she enjoys performing. There’s a warmth and satisfaction in her work that also has concrete financial benefits for her, and her decision to hide her occupation from her mother in particular is less from a sense of shame than it is simply a quite reasonable assumption that her mother won’t understand.

Cam is ultimately, however, as much – if not more – Isa Mazzei’s film as it is Goldhaber’s or Brewer’s. As writer and co-creator, Cam is largely based on Mazzei’s own experiences as a sex worker, and she goes to great lengths to show that while there are challenges – which, in the context of the film’s central narrative, hinge on Alice having her online persona stolen by a mysterious look-alike – there are also numerous benefits to Alice’s decision to pursue this line of work. Many of the characters who make up “Lola’s” male audience were based on men Mazzei came across in her own experience as a cam girl, and both she and Goldhaber go to great lengths to emphasize both the diversity of the kind of women who are employed in this industry, and the kind of men who form their audience.

What is most compelling about Cam is how steadfastly it refuses to collapse sex work into a stereotyped cliché about victimhood and a lack of autonomy on the part of the women who work in the industry, and it is to be applauded for doing so. While the plot hinges on the often quite horrific mystery of Alice having her identity stolen, what is so fascinating about the film is what it reveals to be the source of that threat. Cam is less the conservative morality tale about contemporary sex work as a brief synopsis might suggest, but instead an engrossing, thoughtful film about the volatility of online identities more generally and a powerful exploration of women, labor and sexuality.