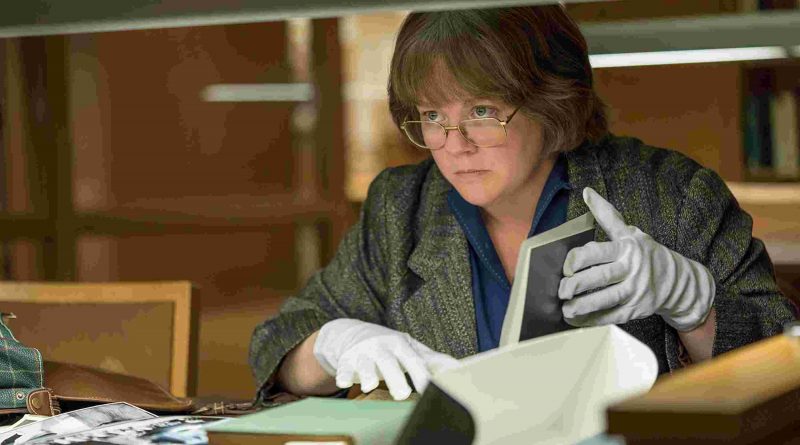 There’s Oscar-buzz about Melissa McCarthy’s snarling performance as a cranky, slovenly, misanthropic Manhattan author who is unable to pay her rent or care for her ailing cat.

In 1991 after her unauthorized biography of Estee Lauder flops, Lee Israel (McCarthy) can’t get an advance on a new book about vaudevillian Fanny Brice – a.k.a. “Funny Girl.” Indeed, her long-suffering literary agent (Jane Curtin) suggests she find a new line of work.

Doing library research, frustrated Lee comes across a letter from Fanny Brice. Surreptitiously tucking it away, Lee peddles it and discovers – to her amazement – that there’s a big memorabilia market.

Surly, scotch-swilling Lee confides her criminal enterprise to her drinking buddy, amiable Jack Hock (Richard E. Grant), a flamboyantly gay British hustler who takes some of Lee’s counterfeit documents to used bookstores where she might be recognized.

Eventually, of course, the FBI catches on, taking Lee to court. Lee died at age 75 in 2014, but in her memoir, Lee estimates she wrote 100,000 words during her forgery career, considering them her greatest literary achievement: “I was a better Dorothy Parker than Dorothy Parker.”

Like many comediennes, Melissa McCarthy has been emotionally bruised, bringing an anguished vulnerability that to this curmudgeonly role – one that might just win her an Academy Award, along with Richard E. Grant as Best Supporting Actor.
On the Granger Movie Gauge of 1 to 10, “Can You Ever Forgive Me?” is a poignant, engrossing 8, hovering between comedy and tragedy.