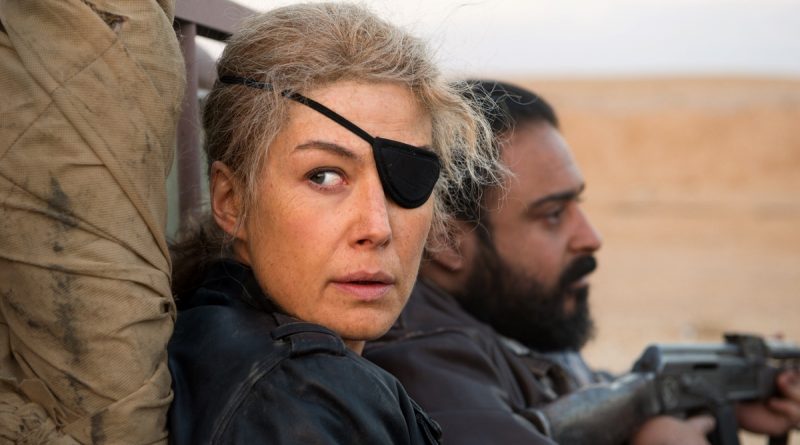 A Private War tells part of her story, tells it searingly and keenly. She gives the lie to journalists’ being the “enemy of the people,” for she reported on true enemies. The film covers her career from 1986 until she was killed in Homs, Syria. In her speech accepting the 2001 award as War Correspondent of the Year, she explains that she “cared enough to go to these places and cared enough to write about it.”

Rosamund Pike, so effective in A United Kingdom, Hostiles, and Gone, Girl, pronounces Colvin’s brilliant words in voice-overs. Pike becomes Colvin. She reveals Colvin’s PTSD and subsequent stay in a hospital, unabashedly exhibits her sexual and alcoholic appetites, and elevates wonder as to whether she’s just plain nuts. Pike is well balanced by Tom Hollander as her editor, Jamie Dorman as her photographer, and Stanley Tucci as a husband.

The other co-star in A Private War is the camera, under the direction of Matthew Heineman, who has produced award-award-winning documentaries such as City of Ghosts, for which he also served as cinematographer. That experience shows in A Private War, where shots of interminable deserts contrast with close-ups of trysts and triage.

In the shadows, always, is Colvin’s commadre, St. Louisan Martha Gellhorn, another legendary war correspondent from another war.

A Private War will leave viewers with Post-Cinematic Stress Disorder. War will do that.