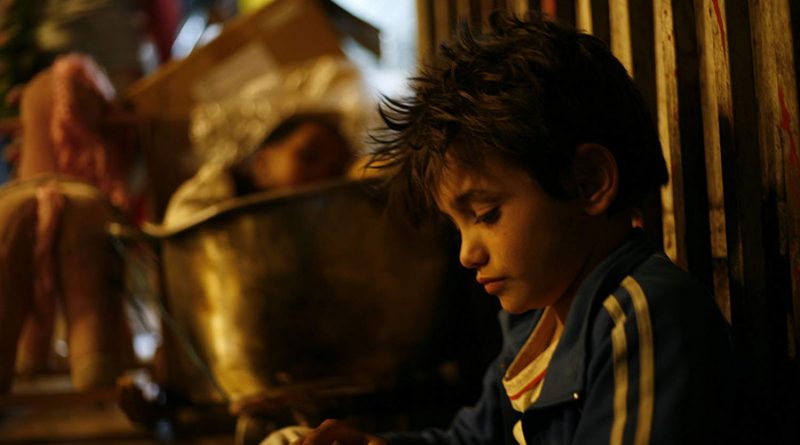 Capernaum (Chaos) centers on a young boy named Zain, perhaps 12 years old, in a Lebanese jail for attacking a man but we see him in court, where he is suing his parents for having been born. We are uncertain about his age – he is uncertain about his age – because he has no birth certificate, no papers. Without papers, he does not officially exist, he is a non-person. The thing is Zain appears to have been born in Lebanon, as have his parents but his parents don’t have papers either, so they are in the same legal bind.

Thus starts director Nadine Labaki’s tour of life in the underclass of Lebanon, where people, particularly children, live in nightmarish conditions of extreme poverty on the edge of society, largely because they have no papers, and therefore don’t officially exist.

Zain and his siblings are sent off by their parents to making money helping shop keepers or hustling fruit drinks on the street. There is no school, no kind words, no beds, and life is an endless battle just not to be evicted from their crowded leaky apartment. When there are hints that his parents might try to sell his pre-teen favorite sister Sahar (Cedra Izam) into marriage, Zain is panicked.

There are striking parallels to both Slumdog Millionaire and Charles Dickens in this grim drama, from the focus on innocent children whose lives are appalling, to indifferent parents, a cast of nefarious characters, harsh officials, and unexpected moments of kindness from strangers. Director Nadine Labaki chose to cast mostly non-actors whose lives were close to these characters.

The story is astonishing, with a heartbreaking performance by Zain Al Rafea as the boy Zain, part Oliver Twist, part Artful Dodger, as he struggles to live amid the chaos, to protect his favorite sister from his selfish parents, and then care for a toddler whose Ethiopian mother befriends him. Although we see children play in the middle of this squalor and chaos, Zain, always hustling, has very few moments of childhood. At on moving moment, he sees an amusement park from a bus, and gets off, as if hoping to just live there.

Despite his grim circumstances, 12-year-old Zain will touch your heart through his sheer resourcefulness, determination and innate human decency. Capernaum is not an easy film, not a subtle film, but it is gripping and heartbreaking.