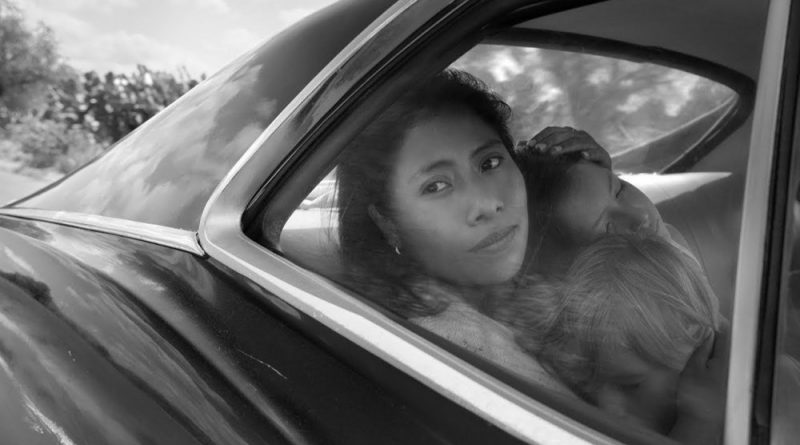 Netflix is enticing Oscar voters by releasing this immersive, black-and-white, semi-autobiographical film from Alfonso Cuaron (Gravity, Children of Men, Harry Potter and the Prisoner of Azkaban) in a few theaters in addition to streaming on December 14th.

Set in 1971 in Mexico City’s Colonia Roma district, the opening scene is an optical illusion: the camera reveals the floor of a courtyard which turns into a mirror of an airplane in the sky above when soapy water flows across it.

It’s being mopped by Cleo (newcomer Yalitza Aparicio), an indigenous Mixteco from the southern state of Oaxaca; she works as a live-in maid/nanny for an upper-middle-class family.

Status-conscious Dr. Antonio (Fernando Grediaga) is often away on ‘business trips’ and drives a Ford Galaxy that’s too big for the carport. Short-tempered Senora Sofia (Marina de Tavira) is obviously harried. Their four school-age children adore Cleo, who stoically cleans up the turds left by their romping Alsatian.

When the violent political upheaval known as the Corpus Christi Massacre in which nearly 120 student protestors were killed by government-supported paramilitaries, doleful Cleo views the mayhem through the window of the furniture store where goes into labor while shopping for a crib.

Sensitively written, insightfully directed and vibrantly photographed by Cuaron, it’s epic, yet intricately detailed in its depiction of loneliness.

Production designer Eugenio Caballero (Pan’s Labyrinth) found an abandoned house scheduled for demolition and recreated it to resemble Cuaron’s boyhood home. To insure authenticity because most of his actors are non-professionals, Cuaron shot in linear order, not revealing the plot twists to his cast.

The film is dedicated to Liboria “Libo” Rodriguez, the woman who helped raise Cuaron when parents divorced.

In Spanish with English subtitles, on the Granger Movie Gauge of 1 to 10, Roma is a tantalizing 10, a poignant, neorealist masterpiece that’s best viewed in theaters.