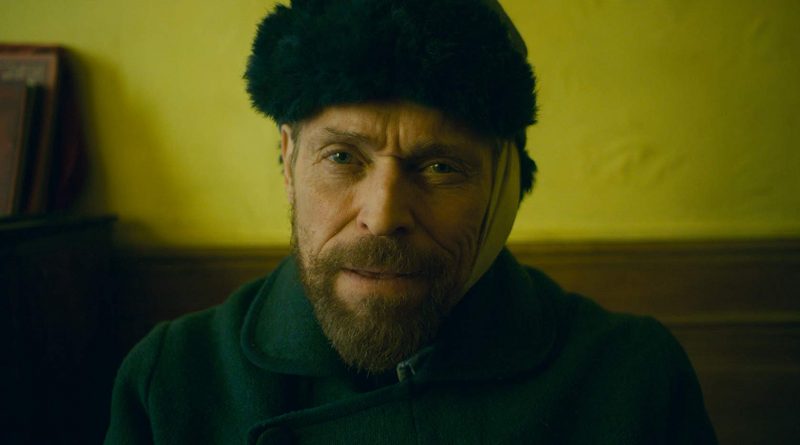 “Maybe God made me a painter for people who aren’t born yet,” muses Vincent Van Gogh (1853-1890), who yearned to be admired – and rewarded financially – during his lifetime. “I am my paintings. I’d like to share my vision with people who can’t see the way I see.”

Julian Schnabel’s fragmentary exploration of this enigmatic Dutch master’s mind during his declining years in Arles, St.-Remy and Auvers-sur-Oise is both fascinating and frustrating.

“I’d like to find a new light – for paintings that we haven’t yet seen. Bright pictures, painted in sunlight,” Van Gogh (Willem Dafoe) explains to his colleague/friend Paul Gauguin (Oscar Isaac) and art-dealer brother Theo (Rupert Friend), leaving Paris for the French countryside.

While Schnabel’s film is not a biopic, it does correct some inaccurate assumptions that people have made over the years, particularly after Kirk Douglas’ Van Gogh portrayal in Lust for Life (1956).

Van Gogh was not antisocial; he simply lacked social graces. His work was all-important: “Sometimes it’s so intense when I’m in the middle of nature that I forget my name and it’s hard to remember where I am.”

For authenticity, Dafoe learned to paint. Schnabel taught him how to hold the brush, make marks and organize his materials – which was necessary for one scene in particular in which cinematographer Benoit Delhomme chronicles Van Gogh painting his shoes.

“At first, it doesn’t look like the shoes but it deeply captures the soul of those shoes. You experience it,” Dafoe says. “Benoit was my biggest acting partner. It was just me and his fluid camera. We say what has to be accomplished and Julian lets us do it.”

Some quibble that Van Gogh died at 37, yet he’s portrayed by 63 year-old Willem Dafoe. But consider the statistic that in France in 1890, the median age of death for men was 48.

On the Granger Movie Gauge of 1 to 10, At Eternity’s Gate is a concentrated 7, a meditative musing.