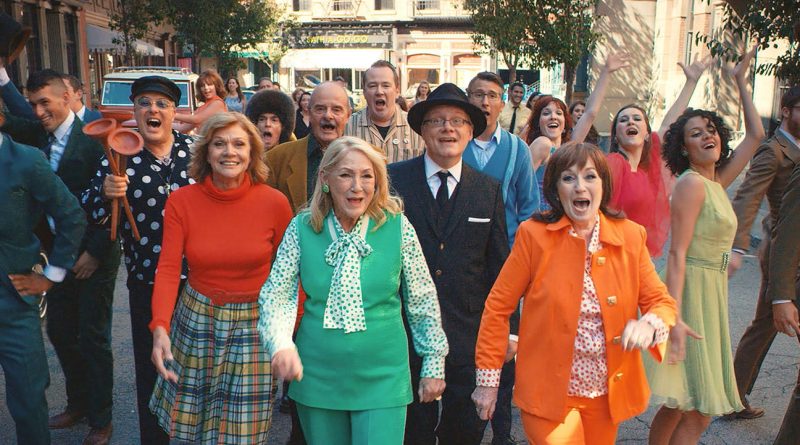 On rare occasions, the truly bizarre and the utterly charming intersect. Just such a case can be made for Writer/producer/editor Dava Whisenant’s directorial debut, which mines the strange world of industrial musicals in the new documentary Bathtubs Over Broadway.

These productions had their heyday in the 50s through the 70s, and were populated by talented performers and composers who created Broadway-level musical shows extolling the virtues and benefits of good salesmanship and manufacturing, in full-throated song and dance numbers about best-selling tractors, sunscreen, plumbing fixtures and more. Premiering at the 2018 Tribeca Film Festival, Bathtubs Over Broadway won Whisenant Tribeca’s Albert Maysles Award for Best New Documentary Director, and has gone on to win Audience Awards and Best Doc Feature in festivals around the country.

The film follows Late Show with David Letterman writer Steve Young, an avid collector in search of cast recordings and film footage created over the years, often marked “Internal use only”, from what is largely a forgotten musical genre. Young even wrote a book about his obsession, Everything’s Coming Up Profits, which started by accident when, while scouring the used record stores for albums Letterman would use as part of a segment on his show, he started finding records from what sounded like very elaborate shows. Corporations like Chevrolet, Purina, Lipton, Citco, Dupont, General Electric, McDonalds, and Ford were represented. Most stars of the cast, and the production crew including the musicians and writers, spent their entire careers creating them. Often their work was never seen by the greater viewing public. However, they sometimes included stars, including Chita Rivera, Martin Short, Tony Randall, and Florence Henderson. Choreographers like Bob Fosse, who went on to win 8 Tony Awards on Broadway, and 5-time Tony winner Susan Stroman worked on these big budget spectacles as well. One comparison was that in the same month in 1956 when My Fair Lady, which cost $446 thousand to produce, went to Broadway, Chevrolet mounted a production that cost $3 million. In Bathtubs Over Broadway, we get to see some of where the money went, by way of cast recordings and vintage film footage, and let’s just say they have to be seen or heard to be believed.

Young and his the collector friends are quick to point up the many merits of The Bathrooms are Coming, a 60s tune that speaks of a revolution in plumbing fixtures. Young calls it perfection on vinyl. There is a film of another song from this American Standard production, called My Bathroom, with a blonde in pink chiffon singing into the mirror, “In my bathroom. In my bathroom. It’s much more than it may seem. Where I wash and where I cream. A special place where I can stay and cream and dream and dream and dream.” Not only does Young know every word, so too do the women who originally performed it. We know this because we are witness to him tracking them down and setting up a meeting. You’ll enjoy the new friends singing My Bathroom together, impromptu, in the hotel bar. They beam, feeling he truly appreciates the work they did so long ago.

For all of what feels like it borders on ridiculous, there is no shortage of earnestness or enthusiasm here. What could be seen as a tongue-in-cheek hipster throw-away is treated with respect and dignity, from both Young and the filmmakers following him. Offered without cynicism, viewers get a peek at what is a passion for collectors, and what was for the performers a successful career in art, doing what they loved.

There are two kinds of documentaries, from my estimation. One exposes wrongs or raises awareness about important societal or global issues, and the other shines a light on subjects to enlighten or educate a wider, or sometimes just curious, audience. Obviously Bathtubs Over Broadway is the latter. Movies like Errol Morris’s Vernon, Florida, about the eccentric residents of a small Southern town, or Ceyda Torun’s more recent Kedi, about Turkish street cats, are documentaries that more fascinate, and entertain, than inspire activism. Only a small percentage of movie fans watch docs as a matter of routine, in part because films of that genre can often be quite intense or depressing. Hooray, then, for one that, with its quirky heart on its sleeve, offers stories from the fringe.

Steve Young says, as one of the wackier productions plays onscreen, “This exists at the far horizon where the adjectives of good and bad don’t apply any more.” There’s no question, though, that he and other dedicated fans of these industrial musicals love them unabashedly. Watching him express his gratitude to the stars and composers decades after they performed them, and seeing how appreciated they feel, is just the sort of exchange that makes Bathtubs Over Broadway such a delight. The last 10 minutes of the film will be get you more in the holiday spirit than any number of Hallmark movies.