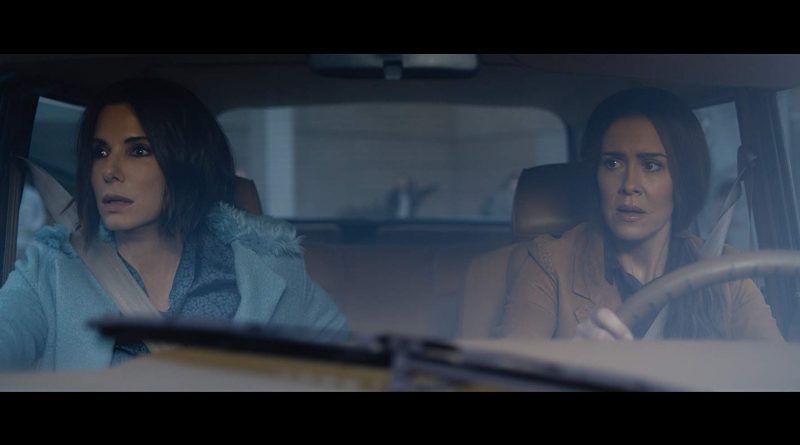 Sandra Bullock is terrific in Bird Box, commanding the screen and our attention in this mostly gripping, occasionally scattershot, sci-fi thriller directed by Susanne Bier, the Danish Oscar winner for In a Better World.

Bullock plays Malorie, an artist who is pregnant and single and not looking forward to motherhood. A likable, prickly relationship with her sister (Sarah Paulson) is too brief as their trip to Malorie’s doctor ends in devastation: alien creatures are causing humans to self-destruct simply because they look at them. It’s basically A Quiet Place where blindfolds, rather than silence, are required to survive.

Adapted by Eric Heisserer (Arrival), from Josh Malerman’s novel, the film jumps between two timelines — the immediate aftermath of the earth-shattering event when Malorie and a few other survivors take refuge in a California house and five years later when Malorie tries to flee the post-apocalyptic devastation with two five year-olds in tow.

Most of the film’s mid-section focuses on the panicked survivors, a sampling of types, holed up in the house owned by the embittered Douglas (John Malkovich, in evil mode). There’s also Tom (Trevante Rhodes), a kind war vet, who bonds with Malorie and Olympia (Danielle Macdonald, recently seen in Dumplin’) who is also pregnant and tries to befriend Malorie without much luck. The perils of motherhood is a theme, however muddled; the three birds who can sense danger that Malorie finds and totes around in the titular box are as vaguely important to the plot as the lovebirds in Hitchcock’s The Birds. Still, there are haunting, creepy, edge of the seat moments in Bird Box, and Bullock holds it together as a reluctant mother turned action hero. She’s in full survivor mode here, battling unseen enemies from behind a blindfold in a place not only quiet but pitch dark.