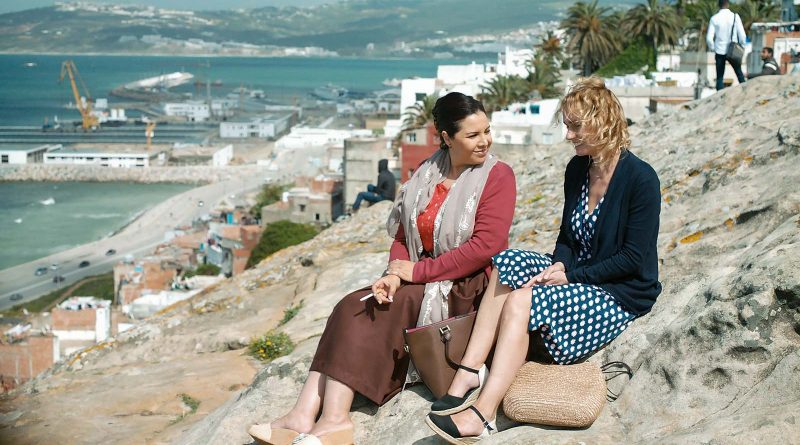 One of the downsides of living in a modern society is loneliness. The primacy of the nuclear family in Western societies almost guarantees that when children mature and start their own lives, their parents will have fewer opportunities for meaningful contact with anyone. French writer-director Gaël Morel Morel’s Catch the Wind brings the loneliness of its central character, 45-year-old widow Edith Clarvel (Sandrine Bonnaire), into sharp focus as she is faced with the possibility of becoming unemployed.

Edith’s employer, a textile manufacturer, decides to close its union factory in France. Workers are offered a generous severance package or the opportunity to work in the company’s factory in Morocco. To everyone’s surprise, Edith decides to move to Tangiers. In modern parlance, Edith is reinventing herself, taking the chance to “catch the wind,” as she tells a friend. In truth, she is terrified of facing every day alone, with no coworkers to take up the space where friends and her estranged son should be.

The screenplay puts Edith through the hardships most immigrants face. She speaks no Arabic, gets mugged, runs afoul of the underground economy and the pecking order that rules her nonunion sweatshop of a workplace, and she does not understand the restrictions that Islam imposes on women or the pushback that the liberalized government in Morocco has made on those restrictions.

Bonnaire, in a part written especially for her, grounds every moment of the film with her character’s sadness and good intentions. Ably supported by an exuberant Mouna Fettou as Mina, the owner of the Tangiers boarding house where Edith lives, Kamal El Amri as Mina’s nearly grown son Ali, and the deft eyes of director Morel and cinematographer David Chambille in creating a complex mise-en-scène that reveals the depth of Moroccan life as well as the shallowness of French society, Bonnaire proves once again why she’s one of the best actresses on the planet.