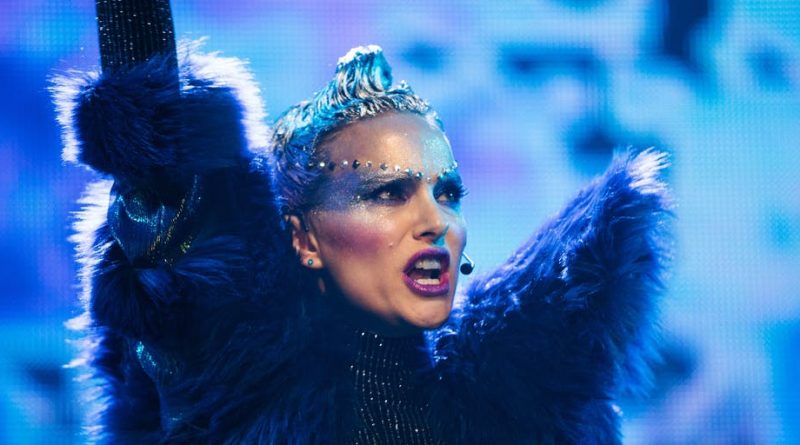 This garish, gaudy mess of a musical melodrama begins on Staten Island in 1999, when teenage Celeste (Raffey Cassidy) sustains a life-threatening spinal injury as she tries to talk down the shooter during a harrowing massacre at her school. Comforted by her older, more talented sister Eleanor (Stacy Martin), Celeste is understandably traumatized. Working through PTSD, they write “Wrapped Up,” a tribute ballad, mourning the tragic violence. When their song goes viral, they’re courted by a sleazy manager (Jude Law) who seems both paternal and predatory.

As a part of their sudden fame and fortune, Celeste and Eleanor are plunged into a glitzy world that’s totally foreign to them; they’ve become popular pop stars, working in Stockholm recording studios and participating in video shoots in Los Angeles.

“I don’t want people to have to think too hard,” Celeste says, “I just want them to feel good.”

By this time, foul-mouthed, leather-clad Celeste, still wearing a neck brace, has her own estranged teenage daughter, Albertine (also played by Raffey Cassidy), who has more rapport with resentful Aunt Eleanor.

On the morning of Celeste’s spectacular comeback show, there’s another mass shooting – this time on a beach in Croatia – and the terrorists are wearing glittering masks copied from one of her most popular music videos.

On the Granger Movie Gauge of 1 to 10, “Vox Lux” is a flashy, deeply flawed 4, pretentious poppycock.