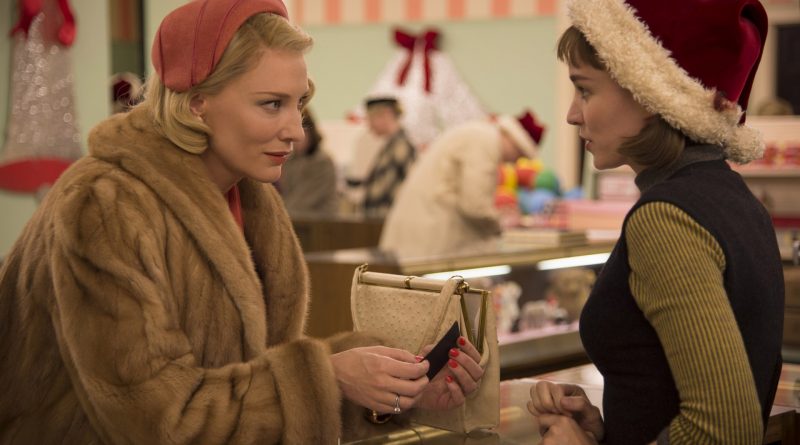 Carol begins in the days leading to Christmas — all those reds and greens!— because the lonely season is a fitting time for two longing souls to meet and fall in love. Todd Haynes’s 1952-set film, from Phyllis Nagy’s script adapted from the Patricia Highsmith novel, starts with Therese (Rooney Mara), wearing a company-issued Santa hat, working the toy counter at Frankenberg’s department store in Manhattan. What’s certainly the highlight of her day arrives from across a crowded room in the form of fur coat and scarlet lipstick wearing Carol Aird (Cate Blanchett) who at Therese’s suggestion buys a train set for her daughter and leaves her leather gloves, accidentally or not, on the counter. (“I love Christmas; wrapping presents and all that,” Carol says. “Then somehow you end up overcooking the turkey anyway.”)

Picking up Therese on the afternoon of her visit to Carol’s suburban home, Carol stops to buy a tree. As a light snow swirls around them, Therese steps from the Packard to take photos of Carol. Therese’s gaze is a lover’s gaze, with Carol turning in slow-motion in front of the tree display, gathering her fur against the wind and brushing her blowing blonde hair from her face. The moment is rendered with more poignancy thanks to Carter Burwell’s bittersweet, hauntingly beautiful score — this selection is called “Christmas Trees.” Later, Carol visits Therese’s city apartment and gives her a camera as a Christmas gift. They embark on a road trip, a desperate flight from convention and toward freedom. In a roadside diner, Therese, wearing a red sweater and Carol in green, presents Carol with the gift of a Teddy Wilson/Ella Fitzgerald record that features “Easy Living,” the song Therese played on Carol’s piano that day she visited. Their journey leads to a motel on New Year’s Eve where they finally kiss and have sex, a moment of release and connection before the fall.

The movie’s magnificent last scene echoes their first meeting. Therese silently moves through a crowded room — a man and a woman, who is wearing red, cross her path but give no notice to her — as red candles shimmer on the tables and Carol, wordlessly, looks up. Their eyes lock.

Carol is a Christmas movie: the melancholy, the longing, the flashes of joy and anticipation, the rushes of despair. And, finally, hope — as a new year unfolds and love steps out of the shadows.