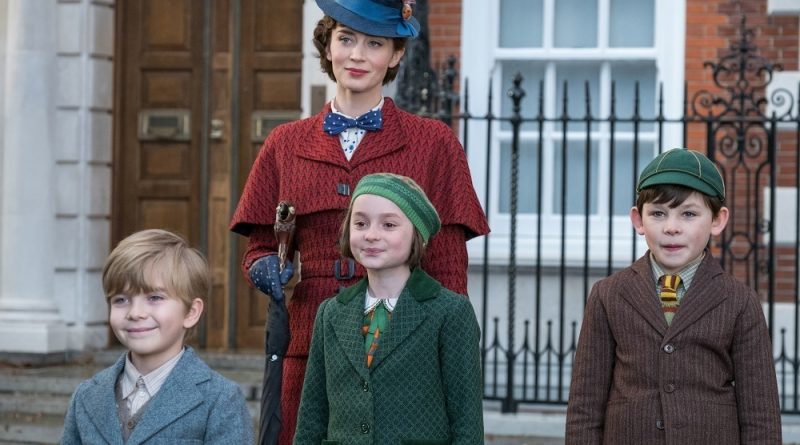 Their mother died a year ago, and grief-stricken Michael’s financial position is so precarious that they’re at risk of losing their beloved family home on Cherry Tree Lane to villainous Fidelity Fiduciary banker, William Weatherall Wilkins (Colin Firth), unless Michael can repay a home-equity loan in five days.

That’s when Mary Poppins (Emily Blunt), the mysterious nanny, descends from the clouds, clutching her parrot-headed umbrella and carpetbag full of surprises.

Mary is snappy, strict and extraordinarily vain, yet warm and fun-loving, particularly when she makes magic with Jack (Lin-Manuel Miranda), her Cockney lamplighter mate, and her manic, directionally-challenged Cousin Topsy (Meryl Streep).

“No one can out-Julie Andrews Julie Andrews,” Emily Blunt says. “This is about presenting my version.”

As an added treat, Dick Van Dyke dances and Angela Lansbury sings. Who could ask for anything more?

The exuberant collaboration between screenwriter David Magee (“The Life of Pi,” “Finding Neverland”) and director Rob Marshall (“Into the Woods,” “Chicago”), along with Marshall’s partner/producer John DeLuca and cinematographer Dion Beebe, results in an eye-popping, entertaining, yet emotional film.

Beyond supercalifragilisticexpialodocious, it deals with the even deeper issues that British author P.L. Travers explored in “Mary Poppins Comes Back” (1935) and “Mary Poppins Opens the Door” (1945).

While Marc Shaiman and Scott Wittman’s new songs aren’t as memorable as the Sherman Brothers’ classics, they’re toe-tapping and tuneful.

On the Granger Movie Gauge of 1 to 10, “Mary Poppins Returns” is a terrific 10, one of the best family films of the year.