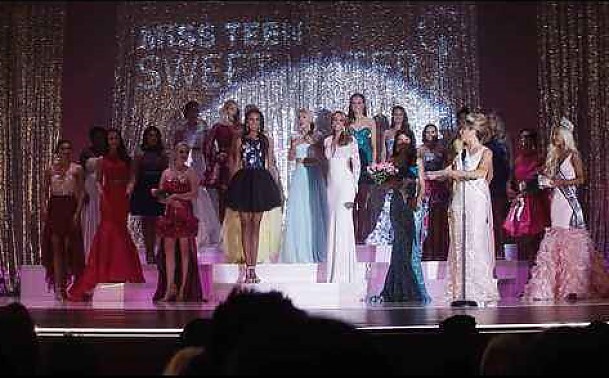 Since the plot pivots on Dolly Parton songs and the country singer serves as a role model, it’s a major disappointment that Dolly never actually appears in this homespun coming-of-age comedy, set in Clover City, Texas.

The titular character is plus-sized, 17 year-old Willowdean Dickson (Danielle Macdonald), nicknamed Dumplin’ by her self-absorbed, single mother, Rosie (Jennifer Aniston), whose entire life has been built on having won the 1991 Miss Teen Bluebonnet pageant, which she now proudly directs.

Since Willowdean was primarily raised by her mother’s fun-loving, generously-proportioned sister Lucy (Hilliary Begley), her aunt’s recent death has triggered a rebellious streak in Willowdean. That manifests itself when she decides to enter this year’s Miss Teen Bluebonnet competition, primarily to embarrass her slim, trim, perfectionist mother.

“I’m not the Joan of Arc of fat girls,” Willowdean maintains.

Although Willowdean initially intended to ruin the event, she and her cohorts are suddenly swept up in the toe-tapping rehearsals, as Willowdean hopes to transform/modernize the traditional ‘beauty’ obsession.

And when they’re stymied by the talent segment, a band of local Parton-worshipping drag queens – led by Lee (Harold Perrineau), who adored Aunt Lucy – comes to their aid.

Plus there’s a romantic subplot involving Willowdean, who works part-time as a waitress in the local diner, and the hunky grill-cook Bo (Len Benward), who is obviously attracted to her.

On the Granger Movie Gauge of 1 to 10, Dumplin’ is a sassy, bittersweet 6, fostering female camaraderie,