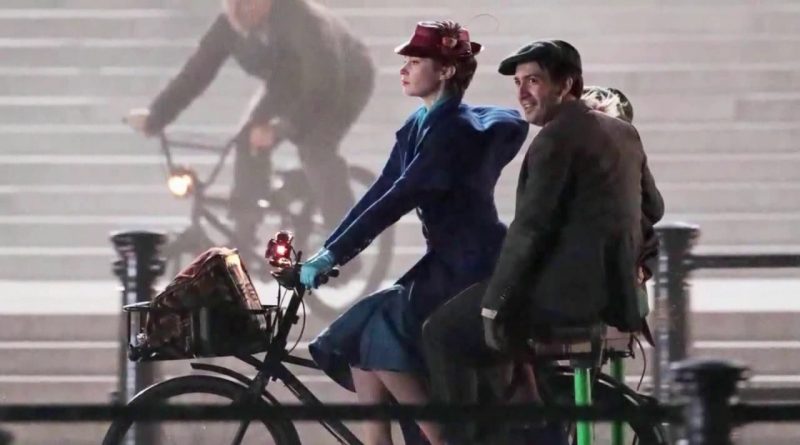 Children will love the color, the movement, and the story, but grown-ups will bring more to Mary Poppins Returns. They will bring memories of Mary Poppins, the 1964 film with Dick van Dyck and Julie Andrews, or even the 2013 film, Saving Mr. Banks, the story of making Mary Poppins with Emma Thompson and Tom Hanks.

Heck, grown-ups may even remember reading the stories of P.L. Travers. They may recognize the London skyline. They may know historical signs of The Great Slump, as Brits called the Depression,.

The Thirties is the era in which “Mary Poppins Returns” is set. The Banks children, Jane and Michael, have grown up, and in true Disney fashion, Michael Banks’s wife has died, leaving his three children semi-orphaned. Banks has taken a job at his father’s old bank, but that estimable institution is calling in the loan on the family house. Something must be done. Someone must save the family, the family’s house at 17 Cherry Tree Lane, the family’s happiness, and the family’s togetherness.

In parachutes one Mary Poppins by stormstick. She assesses the situation and rights it: she cocks her head and rolls her eyes, sets firm boundaries — or not — and nannies the whole Banks family and the bank family into well-being. But what did you expect?

Songs? Oh, there are songs by Marc Shaiman. Dances? Lots of dances, especially for “Trip a Little Light Fantastic,” choreographed, in part, by director Rob Marshall. Sandy Powell’s costumes delight the eye with capelets and pleats. In addition, Zemeckis utilized all the technology unavailable in 1964, so a slip in a tub results in an ocean of dance.

The cast includes the Emilies: Blunt as Mary and Mortimer as Jane. Lin-Manuel Miranda shows his excellence, and Ben Wishaw his steady heartbeat. Included also are the ever fine Meryl Streep, Colin Firth, and Julie Walters. In addition to those actors, Dick van Dyck dances and Angela Lansbury sings — and for them, grown-ups may want to bring tissues.