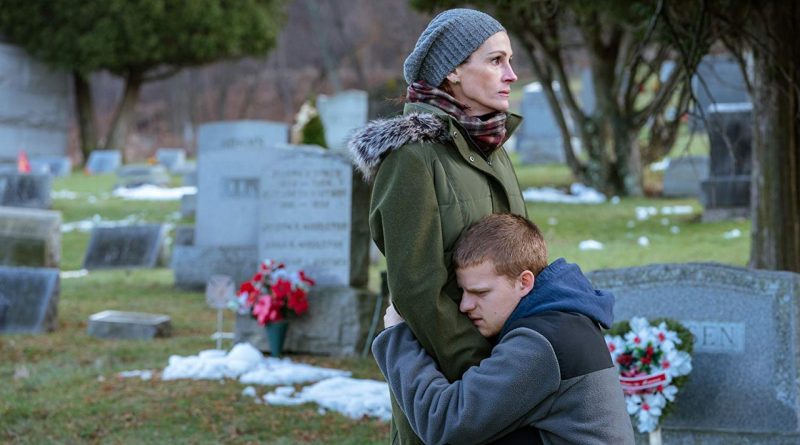 Ben Is Back finds a recovering addict at home facing challenges. With the tragic opioid epidemic, the topic of rehabilitation and a family’s dealing with a struggling member certainly merits cinematic attention. But dramatizing the issue with sensitivity, insight, and honesty presents unique challenges. All the more credit, then, to writer/director Peter Hedges for what he achieves in Ben Is Back, starring his Oscar-nominated, real-life son Lucas as recovering addict Ben.

Christmas Eve and nineteen-year-old Ben has arrived home, claiming his sponsor’s approval after 77 days clean. Gradually, past details emerge, all contributing to the tension with his loving but apprehensive mother Holly, his wary stepfather Neal, and younger distrustful sister Ivy. For at least the first half of the film, family dynamics dominate in a series of interactions fraught with each individual’s own conflicted struggle: Ben to embrace life without drugs and his family to trust Ben—or not. A shopping trip rips open old wounds with Holly the most unforgiving of a senile doctor she encounters. After a late night church scene, the plot makes a U turn as Ben is forced by dire events to revisit his sordid drug dealers and enablers. Out of her element, Holly, who insists on accompanying Ben, glimpses his nightmare world.

The strongest scenes, all in the early incidents, probe the ripple effects of Ben’s catastrophic choices. The actors capture the nervous energy, the forced attempts to be cheerful, and the unpleasant need for skepticism. A mother of a deceased friend of Ben’s delivers one of the most devastating comments, telling Holly, “We can’t save them but you’ll hate yourself if you don’t try.”

As Holly, Julia Roberts experiences the most complex emotional register and segues through clashing feelings flawlessly, as does Lucas Hedges as Ben. Known from Manchester By the Sea, Lady Bird, and Boy Erased, Lucas invites a range of conflicting emotions of my own. As with actual opioid addicts, he’s the boy next door, the successful student or athlete, the charming man or woman we know and like of any age. Courtney B. Vance, as stepfather Neal, offers an important counterpoint to Holly, as does Ivy. Wisely, director Peter Hedges uses his camera and music to highlight the issue, one of critical importance.