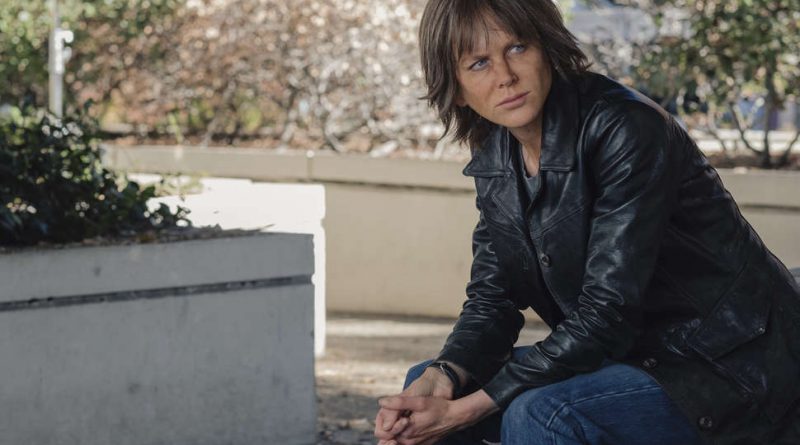 Erin Bell’s life was devastated by the bank-robbing gang that she and her partner Chris (Sebastian Stan) tried to infiltrate in a botched undercover operation 17 years ago. Now the slippery gang leader, Silas (Toby Kebbell), is back in town, and Erin is relentlessly determined to track him down.

At the same time, Bell, a neglectful mother, is aggressively trying to deal with her rebellious, estranged teenage daughter Erin (Jade Pettyjohn), who has hooked up with a sleazy loser (Beau Knapp) and seems to be headed down the same toxic path that Bell followed, leading to her downfall.

Barely recognizable, Nicole Kidman wears a dark shag wig, along with prosthetics that alter her nose and bone structure, as she did previously when she played 20th century author Virginia Woolf in The Hours (2002).

“It’s a rare thrill to work with artists who walk along the razor’s edge of their own unconscious, even as they run the risk of uncovering something icky,” notes Kusama. “Nicole was that risk-taker every day that we worked together, willing to make mistakes, willing to laugh at herself and endlessly open to experimentation…Even when she told me she was terrified of the work we were doing, she never actually seemed afraid. If I had to walk through a haunted house, hers is a hand I’d welcome in my own.”

On the Granger Movie Gauge of 1 to 10, Destroyer is a sneaky, suspenseful 6, filled with grimly blunt brutality.