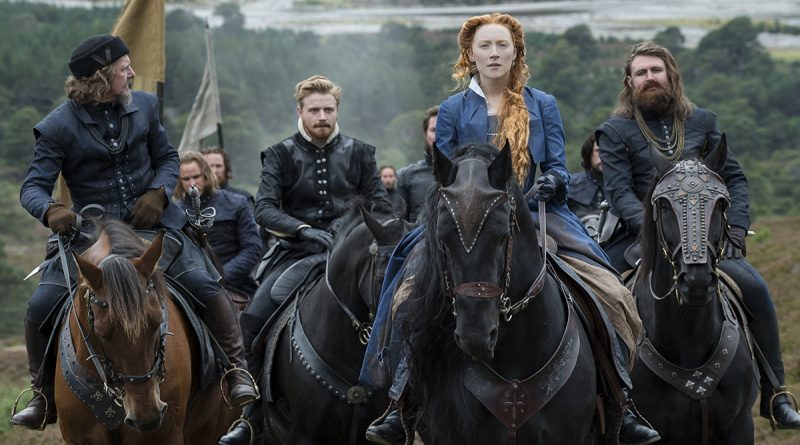 I’m not sure how much of the story is historically accurate but, basically, Mary Stuart (Saoirse Ronan) returns to Scotland from France as a widow at 18, ready to reclaim what she considers her rightful throne. Unfortunately, the current tenant, Elizabeth 1 (Margot Robbie), has no intention of giving up her seat.

Although the two women are, in theory, rivals, it’s the men surrounding both of them who really pit them against each other. They’re the ones who want to wage war. They’re the ones who are power-hungry and would rather not have to bow to any woman.
You get the feeling that, if the men weren’t in the picture, Mary and Elizabeth — who refer to each other as “sister” — would have worked out their differences, ruled the land fairly and peacefully, and enjoyed each other’s company.
But, alas, that’s not what happened and the opening scene of the movie shows Mary with her head on the chopping block before delving into the events that led to that moment.

The story itself is just okay — it could have been so much deeper and richer — but you will still be riveted to the screen because you’re watching acting royalty. Ronan and Robbie are two of the most impressive actresses working today, and they command an audience’s attention much like the monarchs they portray.

It is impossible to take your eyes off Ronan, and I found myself studying her every expression, trying to find the same woman who was so convincing as Ladybird.

The whole movie just made me sad because Mary and Elizabeth could have been BFFs and so much bloodshed could have been prevented. But that wasn’t the way of the world back in the 16th century.