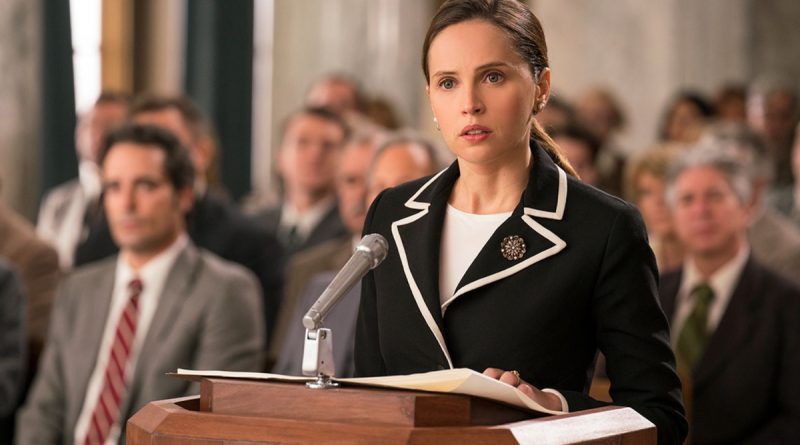 Reviews
January 4, 2019January 7, 2019 MaryAnn Johanson 0 Comments armie hammer, Daniel Stiepleman, felicity jones, Mimi Leder, on the basis of sex, ruth bader ginsburg, Sam Waterston
0 Flares 0 Flares ×
On the Basis of Sex’s hint-of-racy title fronts a just-pretty-okay cinematic experience that coasts on the awesomeness of Ruth Bader Ginsburg. I might wish that Sex was, well, sexier — more adventurous, more meaty, more demanding of the viewer and of its terrific cast — but I’ll take this. Coasting on Notorious RBG is some incredible coasting indeed, and the ride here is of the solidly crowd-pleasing variety, and there’s nothing wrong with that.

Bader Ginsberg, of course, is now a US Supreme Court justice, but in the years of this movie — from the 1950s through the 1970s — she is a young law student, a university professor, and, once she finds her groove, an activist for gender equality. Her story — written for the screen by her nephew, Daniel Stiepleman, and directed by Mimi Leder — is a familiar David-and-Goliath tale of a dogged outsider battling her way into an entrenched, rigidly conservative system that doesn’t want her. The wonderful Felicity Jones is smartly turned out as the young Bader Ginsberg; she’s already married to fellow Harvard law student Martin Ginsburg (Armie Hammer) as the movie opens. Obscene sexism is the rule at 1950s Harvard Law, where the dean, Erwin Griswold (Sam Waterston), stubbornly continues to talk about “Harvard men” even though there are, in fact, a few women in Bader Ginsburg’s incoming class. Continue reading…