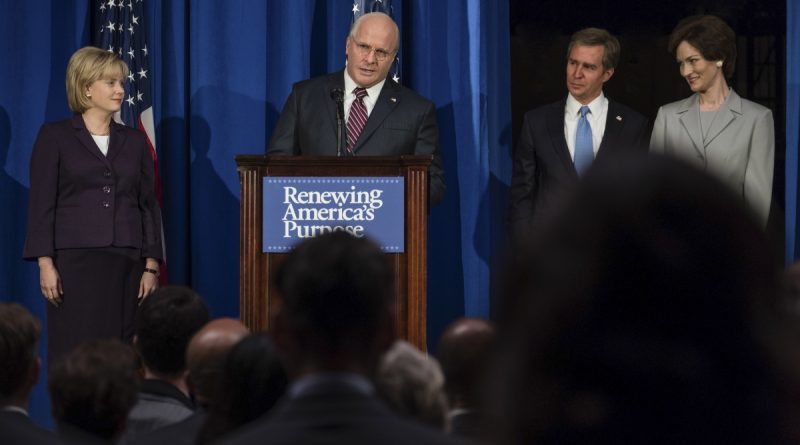 What’s most remarkable is how a 40-lb. weight gain and make-up/prosthetics transform shape-shifting Christian Bale into venomous Chaney, enabling him to deliver an immersive, powerhouse performance.

Note the memorable end-credits scene of a (fictional) focus group, epitomizing the widening American cultural divide that took root during the tenure of this sneering, shadowy man with an uncanny ability, as the narrator (Jesse Plemons) notes, “to make wild and extreme ideas sound reasonable.”

“Dick Chaney was the safe-cracker, the professional you brought in who knew all the ins and outs of our government. He was the ultimate gamesman,” McKay told the Hollywood Reporter. “With Donald Trump the front door to the White House is wide open. There’s deer and dogs and hyenas running around. And this guy is like an orangutan just throwing shit around. But Cheney was the grandmaster who finished the deal.”

But 2019 could be the year that versatile Christian Bale, who was previously nominated for “The Fighter,” “American Hustle” and “The Big Short,” finally wins an Oscar. Kudos also to makeup designer Greg Cannom (Oscar-winner for “The Curious Case of Benjamin Button”), who used every trick in the book – except digital touch-ups.

On the Granger Movie Gauge of 1 to 10, “Vice” is a searing, surreal 6, emerging as an incendiary, yet insubstantial satire