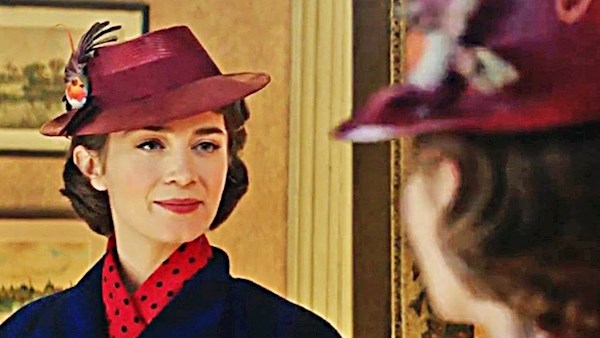 While not practically perfect in every way, the long-awaited follow-up “Mary Poppins Returns” musters plenty of magic to enchant nostalgic adults and willing youngsters alike.

Much of the sequel’s spellcasting must be credited to Emily Blunt (“The Devil Wears Prada”) who wisely avoids impersonating Julie Andrews’ iconic, Oscar-winning, movie star-making turn in the beloved 1964 classic “Mary Poppins.” Blunt plays the mysteriously magical nanny with a spoonful of sugar cut with a refreshing helping of tartness, mixed with the warm singing voice she previously showcased in the hit movie musical “Into the Woods.”

The ever-charming Lin-Manuel Miranda (of “Hamilton” renown) proves the rightful successor to Dick Van Dyke as Jack, a lamplighter who remembers Mary Poppins’ previous visit from his boyhood apprenticeship with Van Dyke’s Bert the chimney sweep. At 93, Van Dyke delights in a cameo, and director Rob Marshall (“Chicago”) fills other small roles with acting greats like Angela Lansbury, Julie Walters and David Warner.

Set 25 years after the first film, the sequel brings the “practically perfect” nanny soaring back into London to again look after the now-grown Banks children – Michael (Ben Wishaw), an overwhelmed widower who’s about to lose the family home, and Jane (Emily Mortimer), a women’s rights crusader like her mother who wants desperately to help her brother – as well as Michael’s youngsters Anabel (Pixies Davies), John (Nathanael Saleh) and Georgie (Joel Dawson), a gregarious lot distressed by their family’s sorry circumstances.

Naturally, Mary brings beguiling adventures into the children’s lives, from a bath time that becomes an undersea exploration complete with a giant rubber duck and a frisky pod of dolphins to a kooky upside-down visit to her Eastern European cousin Topsy (Meryl Streep). Naturally, they go on an animated escapade, this time spinning into the elaborate pattern on a china bowl rather than jumping into a chalk drawing, and of course Jack’s lamplighter pals join them in a high-stepping dance romp just as Bert and his chimney sweep chums did in the original movie.

It may get a bit derivative, but the point of the story is for Mary to administer the same medicine with the same spoonful of sugar to the new generation of Banks children, and Marshall takes full advantage of advanced filmmaking technology to make the enchanted sequences even more thrilling.

What’s more irksome is that Dave Magee’s (“Finding Neverland”) screenplay pushes “Mary Poppins Returns” into more conventional narrative lines than its predecessor: The Bankses are is dealing with Very Big Problems like death and the possible loss of their home instead of just needing their priorities nudged back into place, and this time, there’s a clearly defined bad guy (played with delicious duplicity by Colin Firth) instead of a pack of misguided bankers.

While the sequel soundtrack by Scott Wittman and Marc Shaiman (“Hairspray”) may not boast another “Supercalifragilisticexpialidocious” or “A Spoonful of Sugar” – the rare songs that literally get added to the cultural lexicon – I couldn’t stop humming “Trip a Little Light Fantastic” for days. “The Place Where Lost Things Go” is arguably a stronger and more relatable ballad than “Feed the Birds.” “Can You Imagine That,” “(Underneath the) Lovely London Sky” and “The Royal Doulton Music Hall” are jolly good musical numbers, and it’s hard not to get swept away on a tidal wave of nostalgia when the familiar instrumental themes from the first film play.

What really makes “Mary Poppins Returns” fly high, though, is that it recaptures the spirit of its predecessor. That good, old-fashioned feeling of joy and wonder – tinged with just a little sadness that nothing lasts forever, especially childhood – that I always felt watching the original with my mother returned watching the sequel with my children.

That’s what I call movie magic.