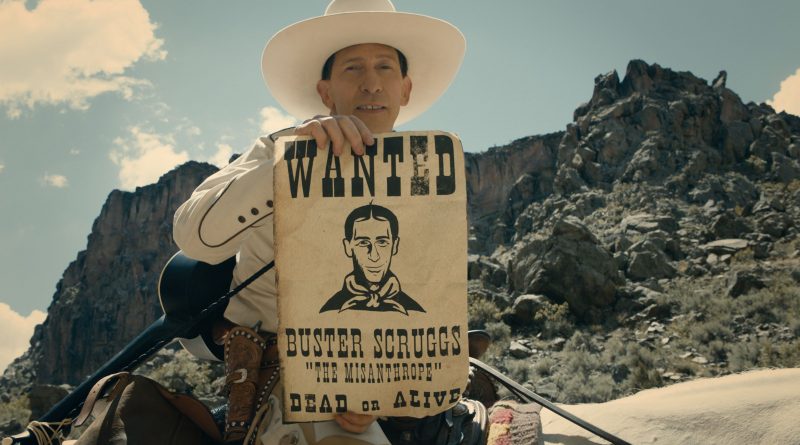 If you threw a lasso at six 19th century Western mini-sketches and tied them together, like an old, clothbound anthology, they’d resemble Ethan and Joel Coen’s latest cinematic diversion.

Diminutive baritone Tim Blake Nelson plays the titular singing sharpshooter, “The Kid,” a white-clad psychopath who lives by his own ethical code, meaning: he doesn’t use his gun unless he’s provoked – wryly evoking the guitar-strumming era of Roy Rogers and Gene Autry.

In the second episode, “Near Algodones,” a dim-witted cowboy (James Franco) robs a bank, faces a lynch mob and winds up under a cottonwood tree with his neck in a noose – twice.

Then there’s “Meal Ticket,” introducing Liam Neeson as the grizzled impresario of a touring show, starring Hamilton, the Wingless Thrush, a frail, legless, armless “artist” (Harry Melling) who dutifully recites from Shakespeare, Milton, Shelly, the Bible and the Gettysburg Address.

That’s followed by “All Gold Canyon,” based on a Jack London story, featuring a dogged old prospector (Tom Waits) who strikes gold in a remote valley with a river running through it.

“The Gal Who Got Rattled” revolves around Alice Longabaugh (Zoe Kazan), a lovely young pioneer whose brother has contracted to marry her off to a rich, old man but, while traveling West on the Oregon Trail, her plans are revised by a proposal from the handsome wagon master (Bill Heck), evoking resentment in his longtime partner (Grainger Hines).

On the Granger Movie Gauge of 1 to 10, “The Ballad of Buster Scruggs” is a cynical, savvy 7, consisting of existential, bleakly humorous vignettes.