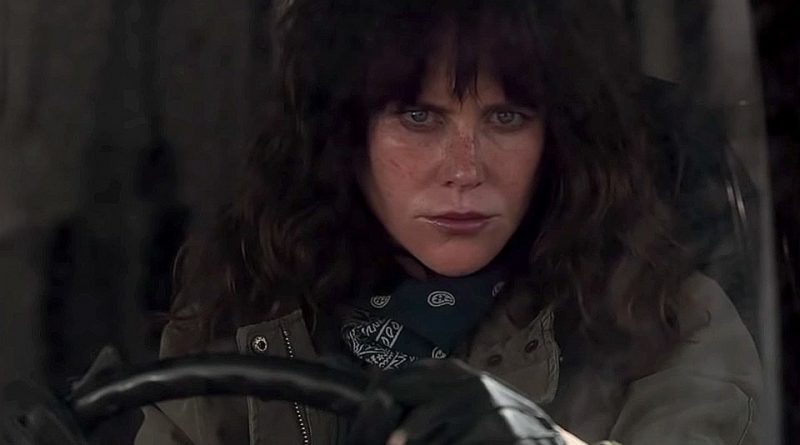 Director Karyn Kusama’s Destroyer can sound, in summary, like a familiar, even trite, thriller. A slightly unhinged L.A. undercover police detective gets obsessed with an ugly vengeance crusade. But, as with Kusama’s debut feature Girlfight (2000), there the expected trajectory ends as a traumatized Erin Bell, played with ferocious fury by an almost unrecognizable Nicole Kidman, pursues her target.

Veteran detective Bell’s face and body reveal her deeply damaged character’s distress, and slowly events from sixteen years in her past fill in the details, most notably her undercover work with a criminal gang that resulted in a haunting catastrophe. But there’s also her unreachable, angry daughter Shelby, her alienated ex-husband Ethan, her partner Chris trying to help but never emotionally let in, and just about anyone else who enters her orbit.

The title itself Destroyer signals the film’s descent into a very dark, destructive place, one Kidman embraces with terrifying abandon. Interestingly, at the Q&A after Destroyer‘s Telluride premiere screening where I first saw the film, Kidman acknowledged that she was both drawn to and frightened of the fierce, frightening Bell persona, so different from her more conventional characters, an admittedly underestimation of Kidman’s enormous range.

In conversation, Kidman and Kusama noted the importance of communicating Erin Bell’s desperate survival mechanisms, responses to past ordeals revealed piecemeal in Phil Hay’s and Matt Mandredi’s economical script. For example, one comment reveals Bell’s history of abuse when an infuriated Shelby says, “Oh, you’re going to tell me again about how your mother burned you with cigarettes.”

The juxtaposition of Bell’s past and current events is sometimes jarring, with a distinctively different pace and level of violence for each. No spoilers here, but Bell’s involvement and energy in chronologically early scenes clash with her implosive, at times zombie like actions in later scenes. Bell is a woman destroyed who intends to take on the mantel of the destroyer.

Though I did tire of the dark cinematography and unrelenting bleak world, there is a coherence and a courageous refusal to compromise for the character as much as for the film.