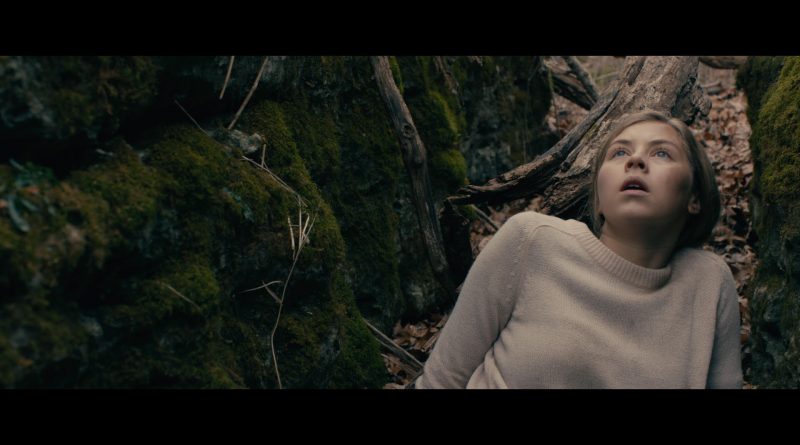 It’s fitting that Rust Creek opens with a young woman running a track course with long, easy strides, her ponytail flying. College student Sawyer (Hermione Corfield) will not only do a lot of running during this taut survival thriller but will also display brains, stamina and all-around badass attitude.

A call for a prestigious job interview in Washington, D.C. gets Sawyer hopping in her SUV and heading out of Kentucky over the Thanksgiving holiday. Her GPS redirects her from a traffic jam and into dense hills and winding roads until she’s lost in the middle of nowhere. While consulting a map — I’m done with GPS navigation, too, after seeing this movie — a pair of brothers, Hollister (Micah Hauptman) and Buck (Daniel R. Hill), who’ve walked straight out of “Deliverance” appear and the movie begins to shape into a nail-biter. Sawyer fights them off and flees into the woods as night falls.

This scrappy young woman, nursing a bloody leg, manages to elude the sinister hillbillies for the night. But she passes out the following day and wakes up in a trailer with cheap wall paneling and a meth cooker named Lowell (Jay Paulson). We’re in Breaking Bad territory now as Sawyer discovers she’s caught in sleazy backwoods crime operation involving Lowell, who happens to be Hollister and Buck’s saner cousin; a redneck Sheriff (Sean O’Bryan) who makes Sam Rockwell’s character in Three Billboards Outside Ebbing, Missouri look charming; and his dogged deputy (Jeremy Glazer) who defies the sheriff’s orders and investigates the abandoned SUV near Rust Creek.

Director Jen McGowan, working from a script by Julie Lipson and Stu Pollard, creates suspense with the outsider in a strange place trope. She creates a nightmarish scenario without overdoing it as she balances the scenic, sprawling Appalachian mountains, beautifully shot by DP Michelle Lawler, with the detritus of hidden meth-addled lives. Cornfield, who bears a resemblance to Scarlett Johansson, gives a gutsy performance that blends Sawyer’s youthful confidence and naiveté with her quick witted resiliency. It reminded me of Elizabeth Olsen in last year’s solid thriller Wind River, but here the filmmakers do nearly as much with far less.