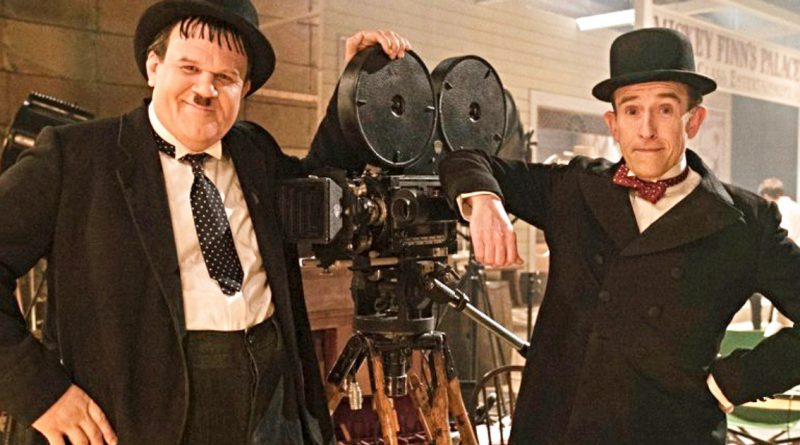 Film comedy fans will instantly know that the title Stan & Ollie refers to the unparalleled duo of Stan Laurel and Oliver Hardy. From 1927 when director Hal Roach paired Laurel and Hardy, this unrivalled pair delighted audiences for two decades with over 107 remarkable shorts and features, successfully transitioning from silent to sound film.

Each was a successful performer before their teaming up. Laurel came to the US as Charlie Chaplin’s understudy; Hardy was already a veteran vaudeville and film star. But together they made history. Post-WWII, however, their fortunes sagged. In 1953, their clever manager Bernard Delfont booked a music hall tour of Great Britain. In a refreshing avoidance of biopic conventions, director Jon S. Baird depicts Laurel and Hardy’s personal interactions and public performances, “analyzing their 35-year relationship through the prism of the tour,” as he states in press notes. Baird adds, “You can see humanity in a moment.” I’d add the profound decency as well.

There are vivid emotional moments: sad, warm, funny, and bittersweet. Writer Jeff Pope writes, “The premise of the film is how they became as close in their real lives as they were in their fictional lives.” Add their wives who join the duo late in the tour, and a full portrait emerges. Critical to this is Steve Coogan as Laurel and John C. Reilly as Hardy, both convincingly conveying the complexity of these two men’s loving and fraught relationship, so rare and wonderful to see such a depiction of men on screen. On and off stage, Coogan and Reilly are perfection, their rendition of the Double Doors routine superb in its timing. Equally impressive, the Way Out West dance, performed several times, is magic, especially when shown with the real Laurel and Hardy footage during the credits. Coogan and Reilly’s version impeccably mirrors the original.