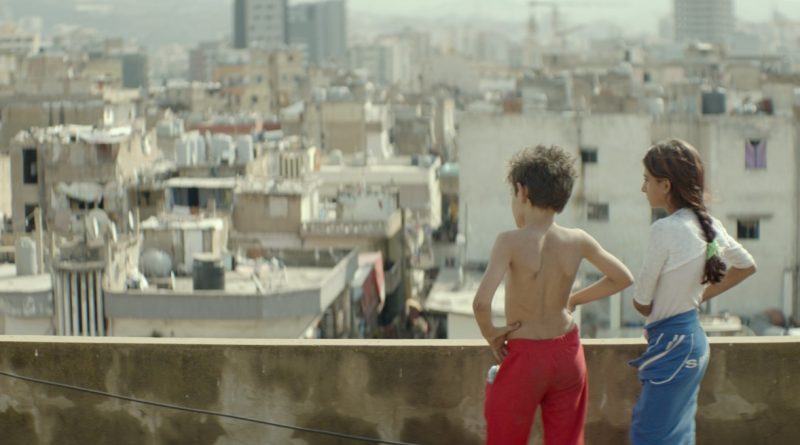 The title of Lebanon’s submission for a Best Foreign Film Oscar is Capernaum, literally the name of a fishing village on the Sea of Galilea in Biblical Palestine. More appropriate to events in director Nadine Labaki’s film, Capernaum signifies, as the subtitle states, chaos, that is, disorder, a state of anarchical disarray. The twelve-year-old protagonist Zain would surely agree.

In an early scene, Zain enters a Beirut courtroom to confront his parents with a lawsuit for the crime of bringing him into this miserable world. Zain has been spending time in juvenile prison for having stabbed a man, and the following flashbacks fill in the details of the crime and his resentment against his mother and father. Zain flees his large, impoverished family after his beloved eleven-year-old sister Sahar is sold to a middle-aged-man. Destitute, Zain moves in with Rahil, an illegal Ethiopian refugee, to take care of her baby son Yonas. Streetwise and resourceful, the good-hearted Zain wanders back alleys with Yonas in tow but no attractive prospects.

As heartbreaking as this is, Labaki and her co-writers avoid sentimentalizing the dire situations, instead occasionally finding humor and lovely tender moments. Labaki’s husband Khaled Mouzanar, one of the story contributors, also produced and wrote the music which evocatively interprets moods but never intrudes into the many quiet observations.

Labaki filmed over four hundred hours of footage over six months, shooting on the streets of Beirut, often recording spontaneous interaction for their nonprofessional actors. All of them bring an extraordinary presence to their roles, the most irresistible being Zain Al Rafeea who plays Zain. In many instances, the lives of those playing Zain’s mother, father, sister, the Ethiopian mother, and the visa broker were as dramatic as recorded events. For example, during production, Syrian and Ethiopian refugee cast members were arrested for lack of legal status, with efforts to free them taking two weeks or more. Fortunately, Labaki and her husband, Khaled Mouzanar, both Lebanese, intervened to remedy numerous problems. As Capernaum shows, however, the extent of the refugee crisis extends far beyond the powerful story shown here.

Capernaum received the prestigious Grand Jury Prize at the Cannes Film Festival pus a 15-minute standing ovation from the critics. In Arabic and Amharic with English subtitles.