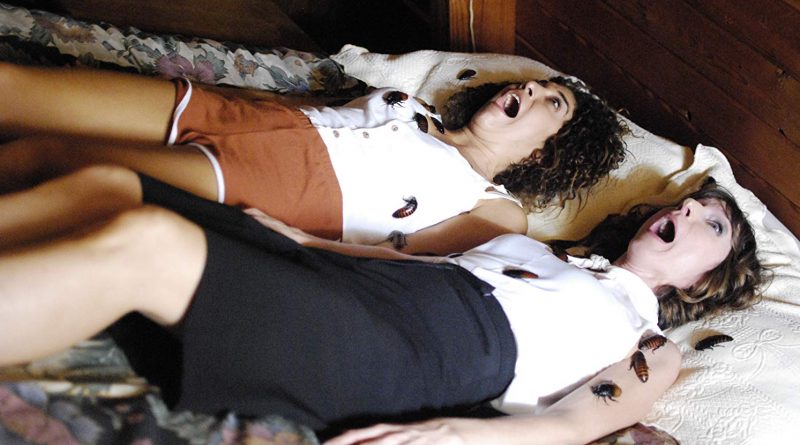 There’s an old horror cliché linked closely to the golden age of slasher films in the 1970s and 1980s that supposedly sees a group of largely unlikable horny teens isolated in the woods where they are inevitably menaced by some kind of monstrous force. They’re fun to watch because as audiences, we’re often split somewhere between being aligned with the experiences of the victims but at the same time we might get a perverse kick out of watching their various (often spectacular) deaths; this echoes Professor Carol J. Clover’s observation in her foundational 1992 book Men, Women and Chain Saws: Gender and the Modern Horror Film that in horror, “we are both Red Riding Hood and the wolf; the force of the experience…comes from ‘knowing’ both sides of the story”.

30 Miles from Nowhere is the perfect combination of familiar, comfortable genre codes and conventions given a fun twist, resulting in thoroughly enjoyable viewing experience. On screen at least, it might not exactly be radical cinema, but perhaps more important is the story of the film’s production behind the scenes: a recent recipient of the ReFrame Stamp which celebrates the accomplishments of women in film, 30 Miles from Nowhere proudly boasts gender and racial diversity in its production, headed up by women in director, screenwriter and producer duties and boasting a 50% all-women cast and crew.

While this is all certainly admirable (and, we can only hope, a sign of the future for genre cinema to come), what is just as noteworthy about 30 Miles from Nowhere is just how fun it is. The combination of Kofoed’s tight, confident screenplay, the film’s experienced cast and Koller’s sharp eye for balancing frights and laughs is electric, Koller’s work in the director’s chain particularly impressive for a first-time feature filmmaker (especially one working so far from home). 30 Miles from Nowhere is the perfect popcorn-friendly horror movie – fun, full of energy, self-aware but never smug, and fresh enough to keep its audience wondering.

30 Miles from Nowhere will premiere in in Los Angeles on 4 March and is set for DVD/Digital release on 5 March. It is distributed by 4 Digital Media in North America and the UK, and Raven Banner Entertainment in foreign territories.