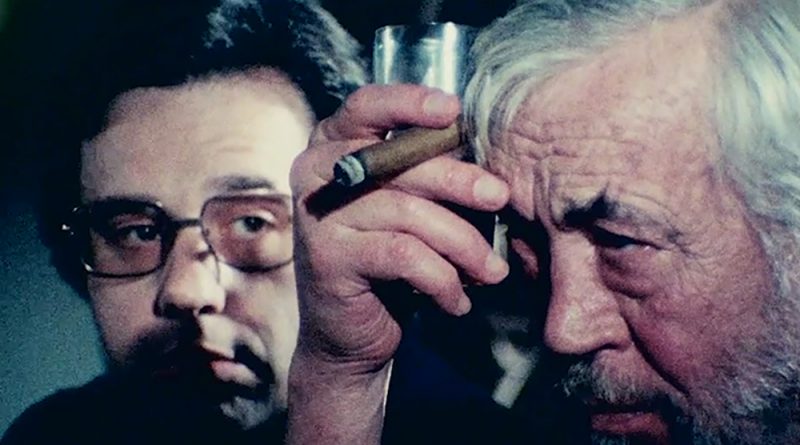 When legendary filmmaker Orson Welles (Citizen Kane, Touch of Evil) died in 1985, he left this unfinished film, which he’d worked on intermittently between 1970 and 1976. It’s been called the most famous movie that was never released.

The concept revolves around a 70th birthday celebration for a celebrated but notoriously hard-drinking, game-hunting filmmaker, macho Jake Hannaford (John Huston) and his complex relationship with an overeager young protégé, Brooks Otterlake (Peter Bogdanovich) – which mirrors Welles’ own bond with Bogdanovich.

Producers Frank Marshall and Filip Jan Rymsza raised funds to patch together and complete Welles’ work, sorting through more than 100 hours of footage that was stored in a Paris warehouse, wrapped and boxed into eight pallets and shipped to the Technicolor offices in Hollywood.

The result is an episodic hodge-podge of black-and-white footage, mixed with color, shot in various formats: 35 millimeter, 16 millimeter and Super 8 – set to Michel Legrand’s jazzy score

According to Marshall: “No one really knew if we had enough material to put together a movie that actually made any sense.”

Eventually, the narrative settles on a key line of dialogue, “Your guy’s a big, pink lobster,” revealing Hannaford’s tough-guy protagonist is hard on the outside, yet soft on the inside.

On the Granger Movie Gauge of 1 to 10, The Other Side of the Wind is a salvaged 6, a chaotic, cinematic curiosity for avid film buffs, streaming on Netflix.