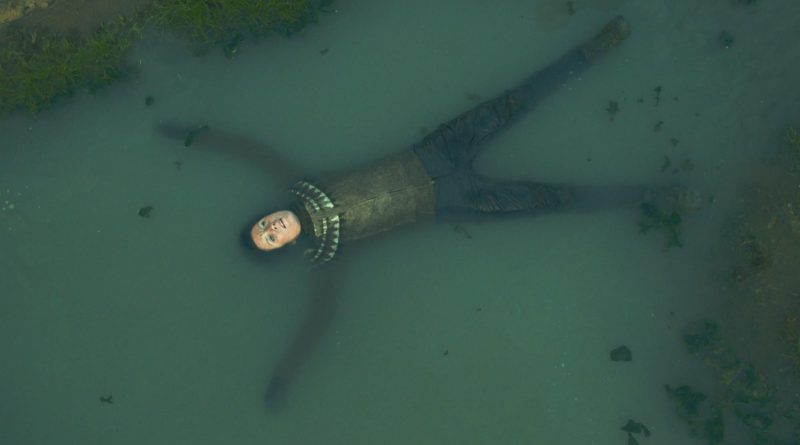 Having a fearless, independent, complicated middle-aged woman at the center of this original comedy/drama is reason enough to distinguish the Icelandic film “Woman at War.” That director Benedikt Erlingsson, working from a script he wrote with Ólafur Egill Egilsson, has managed to make a film about environmental activism in the Icelandic countryside that’s fresh, quirky and compelling is an added bonus. 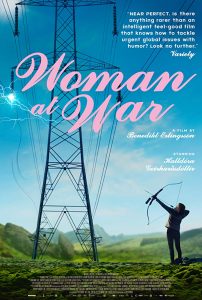 Halldóra Geirharðsdóttir stars as Halla, a genial, bicycle riding choir director who is secretly an ecoterrorist who’s dubbed herself “the mountain woman.” Purposely striding through lush open space, she shoots arrows into the sky and cuts electricity to the region in protest of a global aluminum conglomerate that is taking over her beloved ancestral lands with the Icelandic government’s complicity. Halla prides herself on her sabotage tactics — she has photos of Nelson Mandela and Gandhi on the wall of the cozy home she lives in, alone — that cost no human lives but have triggered much fretting among politicians and bureaucrats.

The only one who knows about Halla’s activism is Baldvin (Jörundur Ragnarsson), a member of her chorus who’s also a nervous ministry official. He’s been helping Halla with information — they talk only after stashing their cell phones in the freezer — but he’s getting cold feet now that Chinese investors are reconsidering a partnership in Iceland. There’s also the burly Highlands sheep farmer Sveinbjörn (Jóhann Sigurðarson) who’s sympathetic to Halla’s actions.

Left out of her secret life is Halla’s twin sister, Asa (also played by Geirharðsdóttir), a yoga instructor. When Halla unexpectedly, after years of waiting, is notified that she’s been approved to adopt a little girl orphaned in the Ukraine, the timing could not be worse. Besides Halla’s ramped-up sabotage scheme, Asa was to be her sister’s adoption back-up in case of emergency. Now Asa plans to live in an ashram in India for two years. The sisters disagree on how best to cope with an oppressive world. As Halla is torn about whether to follow through with her mission to save one child or to save her homeland, Woman at War becomes an internal battle, too.

A prize winner at Cannes’s Critics’ Week where it was picked up by Magnolia, the film is full of unexpected delights including the trio of circus-like musicians (Davíð Þór Jónsson, Magnús Trygvason Eliasen, Ómar Guðjónsson) and three colorfully costumed Ukrainian singers (Iryna Danyleiko, Galyna Goncharenko, Susanna Karpenko) who pop in and out of the action as accompaniment, silent commentary, odd comic relief, even warnings to Halla in the form of musical cues. Anchored by Geirharðsdóttir’s lovely, winning performance, Woman at War beautifully balances urgency and absurdity, which is not an easy tone to sustain. — Loren King

Marina Antunes The tale of a lovable, unlikely eco-warrior unwilling to compromise her fight for the cause to fulfil her dream of becoming a mother, Benedikt Erlingsson’s movie is both a call to arms for people everywhere to stand up for what they believe in but also a lovely story of family and friendship. Topped by a wonderful performance Halldóra Geirharðsdóttir, a gorgeous score from Davíð Þór Jónsson and a touch of absurdist comedy, Woman at War is hugely entertaining.

MaryAnn Johanson Halldóra Geirharðsdóttir’s Halla is one of the coolest, most intruiging people I’ve ever met onscreen. I just adore her… and I adore this movie. It’s so rare to see a vibrant middle-aged woman onscreen, and even rarer to see one so dedicated and passionate about her, er, hobby. I love, too, that writer-director Benedikt Erlingsson has so much fun with undercutting assumptions about what women can and can’t, might or might not get up to: it becomes a great message about using whatever privilege we might have to do good. Being invisible and presumed harmless *can* be used to advantage!

Marilyn Ferdinand: Can one person make a real difference in the world? That is the central question of Icelandic director Benedikt Erlingsson’s unusual thriller, Woman at War. Halla (Halldóra Geirharðsdóttir) is a single, middle-age choir director in Reykjavík who secretly carries out acts of sabotage to disrupt the industrialization of Iceland. The thrilling opening scene shows us just how resourceful and determined Halla is to focus people’s attention on the existential threat posed to future generations by climate change and environmental pollution. She is a lone crusader, however, and the authorities are hot on her heels. Further, she learns that after four years of waiting— a lifetime ago for Halla, given the turn her life has taken— she has been approved to adopt a Ukrainian orphan. Geirharðsdóttir plays dual roles as Halla and her identical twin, Ása, a yoga instructor who chooses to save the world by exploring her innerspace, thus presenting the dichotomy of public versus private action in service of the greater good. The philosophical underpinnings of Woman at War are well served by the smart, well-constructed script by director Erlingsson and coscreenwriter Ólafur Egilsson that positions Halla as a brave, but very human ecowarrior, emphasized amusingly by having an on-camera trio of musicians provide the music cues that would be a heroic, fully orchestrated soundtrack in a more conventional film. This is one terrific movie.

Pam Grady: A choir director by trade, an eco-warrior by inclination, Halla (Halldora Geirharosdottir) is determined to stop an aluminum smelter from despoiling Iceland’s natural beauty, using her bow and arrow to take out power lines across the countryside. This determined woman is the protagonist of Benedikt Erlingsson’s follow up to his debut feature Of Horses and Men, and she is a heroine for the ages. Geirharosdottir’s deeply empathetic performance, fourth-wall breaking musical numbers in the form of an Icelandic folk trio and a second trio of ethereal Ukrainian singers, a rich vein of off-kilter humor, and rising tension as the government gets serious about finding the vandal just as Halla embarks on a major life change combine into an exhilarating, often funny tale that offers some serious observations about the state of our world with a feather-light touch.

Betsy Bozdech Benedikt Erlingsson’s drama about Halla (Halldóra Geirharðsdóttir) — a one-woman resistance dedicated to protecting her beloved Iceland from the harmful effects of corporate greed — is both fanciful and hard-hitting. Geirharðsdóttir is simultaneously tough and vulnerable as a smart, methodical environmental warrior who wants more than anything (other than toppling transformers) to be a mother. Her performance anchors the movie, which also features lush Icelandic vistas and a quirky but effective scoring method.

Susan Wloszczyna: Woman at War is about a 49-year-old Iceland native named Halla (Hallodora Geirharodottir) who by day is a joy-filled choir director and tai chi enthusiast who has portraits of Mahatma Gandhi and Nelson Mandala hanging in her living room. But make no mistake. She is indeed a warrior on a mission to save Mother Earth, as she regularly sabotages an aluminum plant that is helping to destroy the environment. Read full review.

Elizabeth Whittemore Woman at War is a rare cinematic gem, all while shining a light on the delightful Icelandic film industry. Pigeon-holing the film’s genre seems like an overly simplistic choice as it is environmental crusade, drama, comedy, and musical all at different moments. The performances are downright superb. But the storytelling and editing are the most commendable feats for Woman at War. Its creativity knows no bounds. This is a special film that deserves all the attention it can get.

Jennifer Merin Benedikt Erlingsson’s Woman at War is a quirky, satirical and complicated ecomelodrama that thoroughly entertains while challenging viewers to contemplate the disharmonic contradictions between the call to environemental activism and the pursuit of inner peace. Actress Hallodora Geirharodottir portrays twin sisters, physically identical, but psychological opposites. One of them, Halla, is a covert ‘ecoterrorist’ on a mission to save Mother Nature by sabotaging power cables to a polluting aluminium production site, while the other, Asa, seeks harmony with Mothr Nature through the quiet, noninvasive practice of yoga. As the plot twists around expected and surprising interactions between the two sisters, various government law and order authorities, and an accidental ecotourist, the question of harmony is underscored by an in-scene trio of female folk singers and another trio of male folk musicians. The film was Iceland’s Oscar submission for 2018. Jodie Foster is signed up to make an English language adaptation of the film, but it’s hard to imagine that any American adaptation could capture the unique cinematic vision and style of this wild ride of an Icelandic film.

Nell Minow: It is especially welcome, as political discourse seems irretrievably partisan to see this refreshing take on environmental activism, told with gentle humor and a nuanced take on work-life balance.

Cate Marquis In the Icelandic film Woman at War, an attractive, fit, middle-aged Icelandic woman Halla (Hallora Geirhardsdottir) uses her skill with a bow, like a real-life Katniss Everdeen, to knock out power lines. Her goal is to disable an aluminum smelter owned by multinational corporations, who plan to bring in more polluting heavy industry. Read full review.