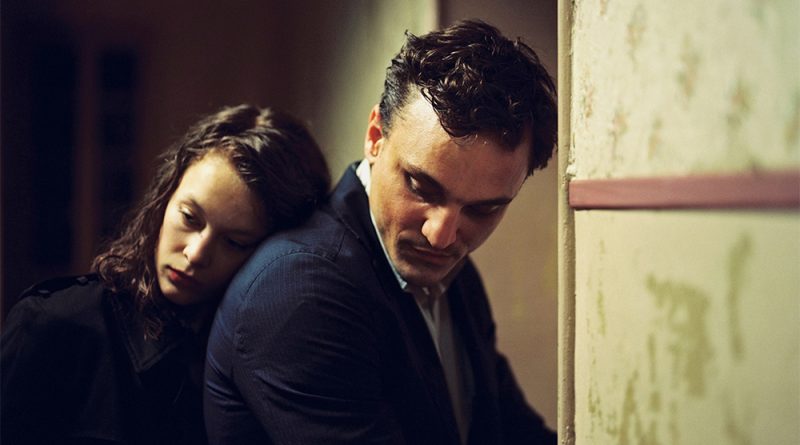 Transit, an arthouse release by German auteur Christian Petzold, is based on the 1942 novel by Anna Seghers of the same name, but this adaptation throws the narrative into historical limbo. It creates an eerie cautionary tale, by setting it without further explanation into the here and now, although in truth it exists out of time.

Transit is, at heart, a melodrama. The story is of Georg (Franz Progowski), who has fled from Paris to Marseille with an eye towards getting out a country poised to begin ethnic cleansing. He has no official papers. A series of coincidences offers him the opportunity to use the travel documents of a writer names Weidel, whom he knows has committed suicide. He gets passage out of the country and a Visa in Weidel’s name from the Mexican embassy. In his wanderings as he waits for the date his boat sails, he encounters and falls in love with Marie Weidel (Paula Beer), who is tied to Marseilles as she waits for her husband, the very man he is impersonating. Through his actions, Georg slowly traps himself into having to choose between honor and safety, self-preservation and self-respect. There is also a mysterious, femme fatale quality to Marie. Does she love her husband? Is she just trying to get out of the country? Is she using Georg to do so, and if she is, does this release him of his duty to be honest with her? It is easy for the audience to imagine themselves in the place of most in the cast, exponentially increasing their stake in the choices these characters make.

A disembodied narration introduces elements of the story. This confessional voiceover is offered in not so much a passive voice, but a resigned one, that leads us to wonder just how dark and sad this tale is going to get. While this is not an action movie, it certainly stacks up its share of dead bodies. Many who inhabit this world have given up the possibility of joy. What of life is worth the risk? What is left worth living for?

Franz Rogowski looks like Joaquin Pheonix’s German cousin, and many would say they are equal in talent and skill. Rogowski is the winner of 2018 European Shooting Star at the Berlinale Film Festival, and successful on both stage and screen in his native country. He won a Lola, the German equivalent of an Oscar, for his performance in In the Aisles, receiving rave reviews in a largely non-speaking role. In Transit, he broods inwardly, his eyes glinting with terror one moment, and staring with hopelessness the next.

Director Petzold says of Rogowski that he is able to balance sadness and confidence, coldness and empathy, like a dancer. He does all that and more in Transit, and it is necessary for him to do so, since every viewer’s connection to this story is predicated on being with him through his worst and most noble decisions.

Bleak but beautiful, Transit is a perfectly-timed look at refugees, ethnic cleansing, and the ever-sliding scale of each individual’s perceptions of personal responsibility and moral obligation. The film also has a circular quality, as if all the players are just in hell, and doomed to play this story out over and over again. Petzold is German, after all, and from the country with one of the worst histories of genocide, but he is bringing to the screen another reminder that this can happen anywhere, anytime.