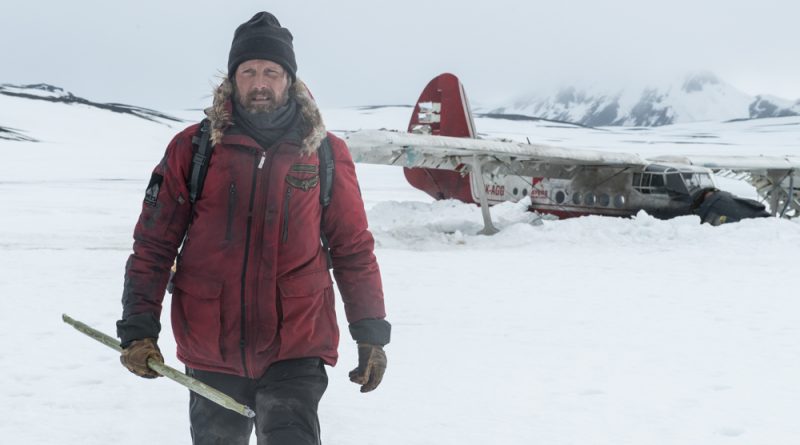 A man digs in the snow, chipping away to free a piece of rock and moving it to the side. What is going on as this first image commands the screen? A subsequent wide shot reveals the huge SOS in the snow, this man completely alone in a huge white expanse in Brazilian director Joe Penna’s fascinating, minimalist film Arctic.

This man trudges through icy snow to a single-engine plane, its nose buried after a crash never presented or explained. In fact, the unusual and, for my taste, commendable decision not to insert flashbacks or explanations makes Penna’s debut feature all the more disarming and appealing. There’s no backstory to think about, even less than with Robert Redford’s character in All Is Lost or Tom Hanks’ in Cast Away. Moreover, with no more than what amounts to a page of dialogue, Overgärd, as he’s named in press notes, is just there, utterly present as few characters ever are in scripted films.

Overgärd demonstrates admirable survivalist knowledge of what to do to maximize his chances for discovery: he sits on high ground hand cranking his radio signal box; he’s rigged up a pulley system for catching fish and erupts in ecstatic joy when he snares a big trout; he has an insulated box for storing these fish; and he regularly retreats to the plane’s interior to sleep and rest. Details get little things right: a pole that freezes in the snow overnight and must be hammered free, creeping frostbite, contending with powerful Arctic winds. Then, after one tragic event, Overgärd must make the painful decision to stay with the plane or try to navigate his way over mountains to a supply station.

Shooting primarily in Iceland, cinematographer Tómas Örn Tómasson captures topography equally gorgeous and intimidating. But, above all, a mesmerizing 98 minutes comes to life through the astonishing nonverbal performance of Mads Mikkelsen. His face offers its own landscape of pain, determination, physical exertion and emotional exhaustion. He lost 15 pounds in two weeks of shooting. On the acting challenge, Mikkelsen says, “You have only yourself to remind you to be truthful in every scene.” His naked honesty overwhelms. Years ago, trapped alone in a blizzard’s whiteout while backpacking Zion’s North Rim, I can testify to the reality, the terror, and the will to live. Arctic captures it perfectly. At Landmark’s Plaza Frontenac Cinema.