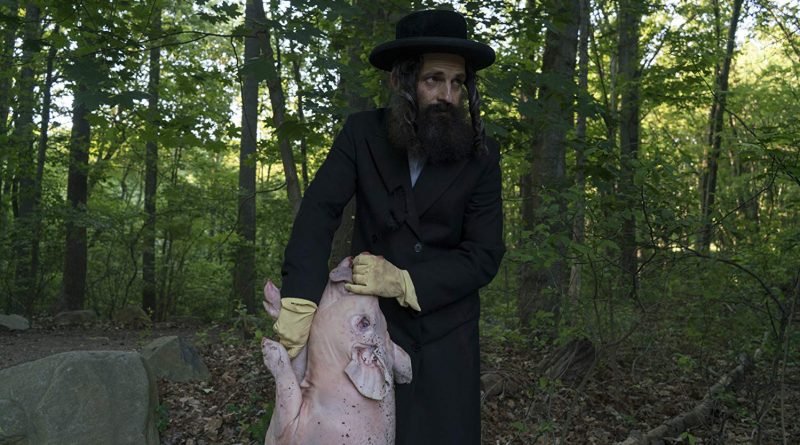 To Dust tries hard to be funny, too hard.

To Dust deliberates on the phrase “from dust to dust” found in the ancient Book of Common Prayer and, in part, from Genesis in the Hebrew Scriptures. Shmuel, a cantor, is rocked off his axis by his young wife’s death.

Shmuel is not prepared to deal with her death. He asks his rabbi, who clichés him. “Maybe you don’t think of these things?” he suggests. So Shmuel turns to science. That’s where he meets Albert, a science teacher at a community college. Just as Shmuel is quick to correct Albert that he is not a rabbi, Albert quickly corrects Shmuel that he is not a doctor, only an instructor.

So these two men, on opposite sides of religion, down a few rungs in the hierarchy of their chosen fields, become partners. They set out to answer Shmuel’s anguished query about what will happen to his wife’s body after death. “How does she dismantle?” he finally is able to articulate.

Their study involves a pig, not your usual aid in Jewish inquiry, but Albert has read in a book that the pig is closest to the human in putrefaction. So pig it is. Burial it is. Exhumation it is.

What it is not in this movie is funny. It tries to be — very, very hard. Writers Jason Begue and Shawn Snyder, who also directed, tried to be funny simply by opposing two characters in a duel of desperation and then by writing ignorant lines — like Albert’s to Shmuel: “Who doesn’t like bacon?”

Matthew Broderick, the venerable actor, plays the shlemiel, and Géza Röhrig, the Hungarian actor from “Son of Saul,” try to make the characters interesting and amusing. Contrasts in literature are classic themes. But bank a Hasidic Jew against an atheist, and you get more desecration in the guise of a weird bromance than simply contrast. And you don’t get funny.