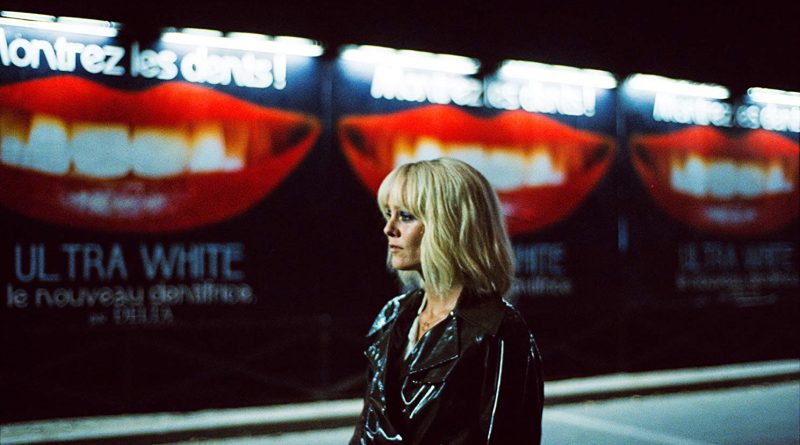 It’s nothing new for French screen superstar Vanessa Paradis to leave a trail of breathless, shell-shocked viewers in her wake as audiences have tried (and often failed) to return to normal lives after seeing her rampage across the screen in a career as a screen actor that has now spanned thirty years now. Often sadly reduced to a bit player in tabloid stories about her personal life, as an actor Paradis has for decades demonstrated time and time again an impressive range in her craft, but it is most recently in Yann Gonzalez’s slick neo-giallo Knife+Heart that her unparalleled screen presence has been most effectively utilized.

Competing for the Palme d’Or at the 2018 Cannes Film Festival, the film has since had a steady release on the international film festival circuit and is soon to travel around Australia with the Alliance Française French Film Festival. Marked by Gonzalez’s unapologetic approach to cinematic excess and retro aesthetics, the only thing more outrageous than the film’s look is its story: Paradis plays Anne, a gay porn filmmaker in Paris in the late 1970s whose production house is brought to a halt by a serial killer intent on murdering her actors. Juggling this with her own personal foibles and relationship breakdown with her partner (and editor) Loïs – played beautifully by Kate Moran – Anne incorporates the murders into her movies and accidentally finds herself in an informal investigator role as she struggles to keep her business (and her life) in one piece.

The plot alone perhaps indicates why William Friedkin’s once-lambasted by now widely admired cult film Cruisin’ is a near-ubiquitous point of reference for Knife+Heart, and Gonzalez’s desire to immerse himself in an underground scene well outside the purview of supposedly polite society certainly demands parallels with Friedkin’s similar mission. But alongside a group of contemporary French filmmakers including Gaspar Noé, Bertrand Mandico (who makes a cameo in Knife+Heart), Lucile Hadžihalilović, Hélène Cattet and Bruno Forzani, Gonzalez’s practice is marked as much by a heavy, focused engagement with sensory provocation as it is mere storytelling. It is here perhaps that the logic that has lay behind Knife+Heart’s other common points of reference – Dario Argento, Ken Russell and Brian De Palma, for starters – become more apparent.

Argento in particular is a crucial reference here, flagging Knife+Heart’s status as part of a growing neo-giallo movement of which Cattet and Forzani are also themselves a central part of with their features Amer (2009) and The Strange Color of Your Body’s Tears (2013). A contemporary reimagining of the famous Italian sex-and-horror films of the 1960s and 1970s made by directors including Argento, Lucio Fulci, Sergio Martino, Umberto Lenzi and others, giallo films too shared more interest in creating sensorial impact through defining excesses in colour, music and mise en scene than the nuts-and-bolts mechanics of their murder mystery storylines might alone suggest.

With Anne’s signature green raincoat and knee-high red boots, the Paris she traipses is drenched in neon, sweat, and grime. There’s an immersive intensity in the film that only escalates when Gonzalez gently pushes us into the even more excessive films themselves, balancing these spaces with a third primary setting which is just as intoxicating (and, ultimately, narratively significant); the countryside.

Both vicious and joyful, nostalgic and distinctly contemporary, Knife+Heart is above all else unapologetic in the multiple excesses that mark this defiant project of queer genre filmmaking. There is perhaps something in the tension between the familiarity of Paradis’ broader star persona and Anne’s volatility and often brutal fallibility that make the actor feel almost like a tour guide as we travel through this dark, intriguing universe. Strange and yet somehow familiar, its shadow and light lure us inside Knife+Heart in equal measure.