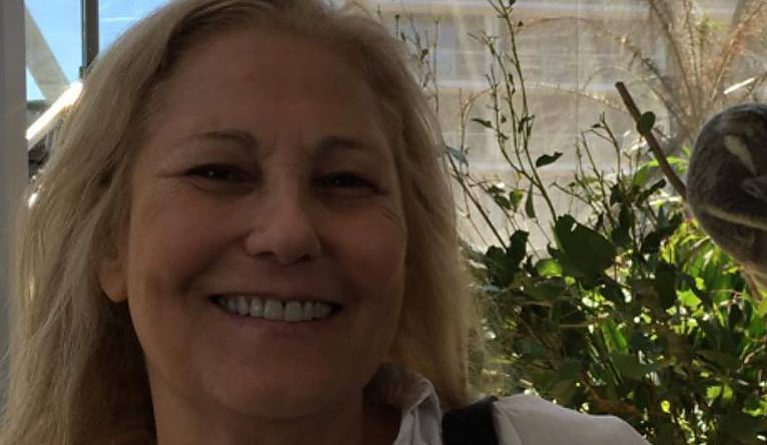 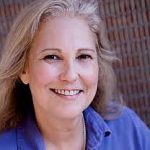 AWFJ’s March Spotlight is on Patricia Resnick who not only wrote the original screenplay one of the most iconic female-centric films of all time, 9 to 5, but her career continues to flourish. She earned a Drama Desk nomination for writing the book for the Broadway musical 9 to 5 in 2009; she was a consulting producer on the landmark series Mad Men and is a writer on the much-anticipated miniseries, Armistead Maupin’s Tales of the City which airs on Netflix in June.

Resnick did this interview for AWFJ on the heels of another huge success. She’d just returned to her home in L.A. from London, where 9 to 5 the Musical had just opened in the West End to rave reviews.

When Patricia Resnick says she’s “very, very, very tired of seeing women through the male gaze,” she speaks from solid experience. She has had what she refers to (in the subtitle to her blog) as “35 Years Of blood, Sweat and Tears in the Hollywood Trenches.”

Resnick is, after all, the creator — at age 26 — of one of the most beloved screen comedies of all time, 9 to 5 (1980), a seminal film for three of the entertainment world’s most popular stars, then and now: Jane Fonda, Lily Tomlin and Dolly Parton. They played a trio of disgruntled office workers who take madcap revenge on their sexist boss. 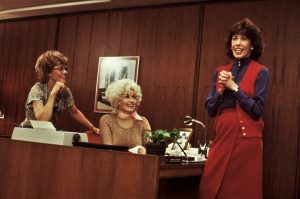 9 to 5′s smashing success led to a spin-off TV show on ABC and, in 2009, a Broadway musical. Although Resnick appreciates her work’s longevity, she laments that 9 to 5 isn’t at all dated.

“When we opened out of town in LA in 2008, there were male reporters and critics who thought all of this had been put to bed — intentional pun — and these problems had all been solved, therefore making this a period piece and how were contemporary audiences going to relate to it? That was so unbelievably insane to me.”

Since #MeToo, she says, “At least they can’t think that any more and that’s a good thing.” 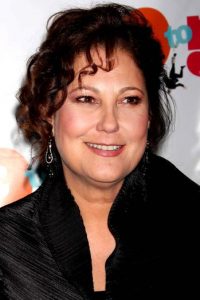 Endowing cinema with three juicy comic roles for women, 9 to 5 would still be a cause for celebration today, let alone in 1980. But, notes Resnick, “in some ways, it was easier to break new ground in the Hollywood of the late ‘70s and early ‘80. Everything didn’t have to be a home run every time. You could hit a double or a triple. Now, just like everything else, the movie business has been corporatized. Everything is about making money — it was always about that, but now it’s about making money all over the world. Making things that will appeal globally limits what you can do. The thing that really irritates me is how hard it is to think of a recent movie with three female leads; the only one I can come up with is The Favourite.”

With a successful Hollywood career spanning decades, Resnick has been in an insider position to observe and evaluate changes in the industry. She says she is heartened that more women are directing films, but it’s not still enough.

“I say to male friends and family members, if 95 percent of movies and television about men were written and directed by women, would you not think that would be a skewed view of men? That’s what we live with. I know there’s more of a fight now for female directors but it also needs to be a fight for female writers and female show runners.”

A bit of background

Resnick was born and raised in Miami, Florida and moved to Los Angeles to attend USC film school. After graduating, she got her professional start in the industry working with one of cinema’s greats, Robert Altman, writing the screenplays for A Wedding (1978), with one of Altman’s signature ensemble casts including Carol Burnett, Paul Dooley, Mia Farrow and Lillian Gish, and Quintet (1979) starring Paul Newman. 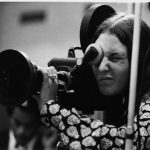 Despite entering her professional career through this auspicious gateway, Resnick didn’t get the chance to direct a feature. “There was no way I was going to get a shot. It was just not going to happen. That’s the way things were,” she says.

So, taking creative matters into her own hands, Resnick wrote and directed a short film, Grandpa’s Funeral (1998), which aired on Showtime, and earned her an Ace nomination for directing and an Ace for writing. The lovely film has a personal connect to AWFJ: the cast included actress Eda Reiss Merin who happens to be the mother of AWFJ founder Jennifer Merin.

There’s still strong audience appetite for 9 to 5, and Resnick is feeding it by currently writing a new, updated version. “It’s somewhere between a sequel and a reboot so there will be similarities. It’s set in an office, and will deal with problems young women have today which in some ways are worse than the 1980s. Then they’ll hook up with the three original characters,” she says. “Part of the fun was figuring out where I think those three characters would be now, who they would be now.” 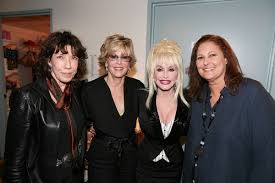 When Resnick told Jane Fonda and Lily Tomlin over dinner about her idea for the sequel, they immediately jumped onboard. Then Resnick called Dolly Parton, who also wanted to be involved. “I wanted to give the project the best chance I could to make sure I sold it and it happened … so I decided I had a better shot if I paired with a younger writer, preferably one of color since we want this version to be much more diverse. Jane suggested Rashida Jones. We went in and sold it as a package. Right now, we’re just waiting for the dust to settle from Disney taking over Fox to get a good draft together that we all feel go about and then we’ll move forward.”

Resnick is enjoying her other role as a television staff writer. “I discovered I really enjoyed the collaborative nature of that. When I started with Altman, it was very collaborative. Theater is very collaborative. A lot of writing, feature writing in particular, is very isolating so I discovered I enjoyed working in a room with other writers and Tales of the City was really a spectacular, wonderful experience in terms of the writers’ room,” she says. “The whole room was LGBT. Lauren Morelli is the show runner and she put tougher a room of people[who liked each other and worked really well together. As a writer, you’re always looking for what’s next; I have a couple of ideas for TV shows and for a feature. Such is the life of a freelance writer.” 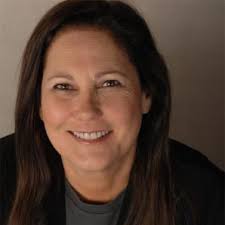 Patricia Resnick’s professional persistence, resume and sense of humor are reasons enough for AWFJ to put her in our March SPOTLIGHT. But equally impressive and important is that she is known to be remarkably generous and is famously collegial. Brava, Patricia Resnick! This is a great time to celebrate your achievements and we can’t wait to see the next evolution of 9 to 5, and whatever else you’re currently conjuring to bring to stage and screen. — Loren King