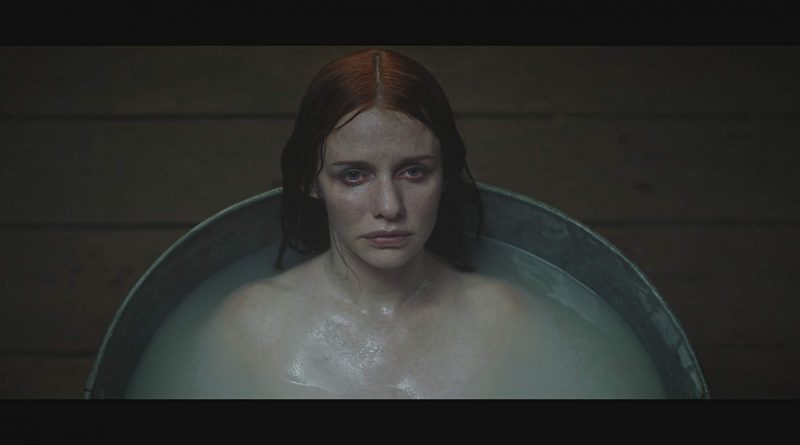 Delving deep into Jewish folklore, this saga begins with a brief prologue in Prague, showing a young girl, Perla, watching a rabbi grappling with the monstrous golem he created.

Then it’s 1673 in a Lithuanian shtetl, where Hanna (Hani Furstenberg), whose only son Josef died seven years ago, regularly eavesdrops on rabbinical meetings and is secretly studying Kabbalah.

Their tight-knit village is so isolated that, when a deadly plague strikes, they’re spared. As a result, neighboring Gentiles blame the Jews for their suffering.

When marauding Russians Invade Hanna’s sister’s wedding, they’re led by Vladimir (Alex Titenko), who demands that the Jews’ healer, now-grown Perla, cure his dying daughter Svetlana, threatening, “Fail – and I will burn this place to the ground.”

While the elderly, pacifist rabbi urges repentance and prayer, Hanna advocates fighting back. To do that, she sneaks into the synagogue to comb through the sacred texts for instructions on how to conjure a golem, ostensibly for protection.

The golem emerges as a grimy little boy, clutching a doll that belonged to Hanna’s son. When Perla spies Hanna lovingly washing dirt off this mysterious creature that she envisions as Josef’s reincarnation, she urges Hanna to destroy it by removing a holy scroll from its mouth as soon as Vladimir departs.

Meanwhile, after Hanna spies her husband Benjamin (Ishai Golan), the rabbi’s son, dining with a flirtatious neighbor, her inner anger propels the golem to stealthily murder the predatory woman. Obviously, Hanna and the golem share a deep, mystical bond.

Written by Ariel Cohen and directed by Israeli brothers Yoav and Doron Paz (Jeruzalem), it’s visibly influenced by Mary Shelley’s Frankenstein, including having the golem clad in Hanna’s hand-stitched tunic.

Inspired by the Golem of Prague myth, Yoav explains, “We wanted to make a new and relevant adaptation (with) a female heroine and unique twist…and a new genre was born: Jewish Horror.”

On the Granger Movie Gauge of 1 to 10, The Golem is a suspenseful, supernatural 6, a terror tale of revenge and redemption.