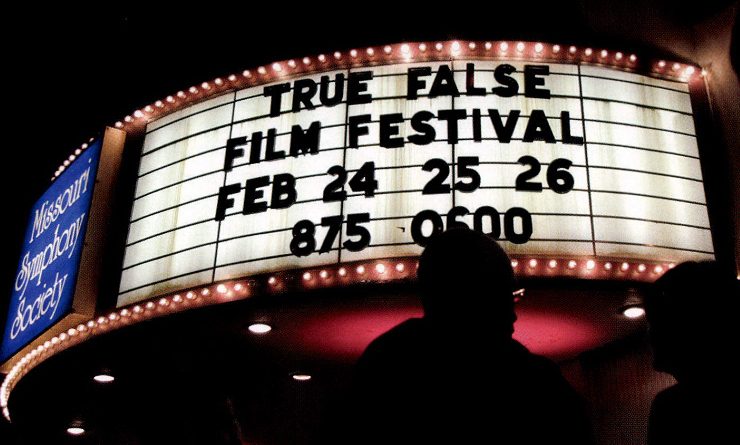 Each year at the end of February, into the first weekend in March, the True/False Film Festival features an array of outstanding documentaries from around the world. Held in Columbia, Missouri, home of the University of Missouri’s main campus, 960 volunteers ensure events run like a fine-tuned clock. As a bonus, each of the eight major venue captains, called the Queen of the venue, dresses in costume, usually wonderfully outrageous and flamboyant. Above all, they keep everyone informed of how the fest runs. Another bonus is that on-stage musicians entertain before every screening as the first to the last of the audience comes in. The diverse music represents talent from across the U.S. and Canada, and, upon occasion, farther afield. There are buskers around, a parade on Friday night, street dancing, and more.

Passholders of various designations (depending on the cost, which is quite reasonable) can reserve tickets. Attendees without a pass who can’t get a ticket (because of high demand) can queue one hour before a screening. Once they have their numbered quque, they can leave until 15 minutes before the screening, at which time all empty seats are filled. Especially at the larger venues, chances are very good that most, if not all, queue holders will get in.

Passholders get in first, the Super and Silver Circle passholders who have a ticket half an hour before a film. Then ticket holders, then the queue. There are a few more details, for example, walk up privileges without a ticket for Super and Silver Circle folks at the larger venues. But this doesn’t happen too often, and the years when I did queue (I buy a pass now), I was never shut out of a screening though I was the last one in on one occasion, whew.

All of this notwithstanding, we’re there for the films, an impressive selection of the best documentaries and, in a Neither/Nor sidebar, films that blur fiction and nonfiction. The lion’s share has regularly taken my breath away. This year I saw 16 films in three-and-a-half days. Those most memorable are as follows.

Knock the House Down: Director Rachel Lears amazing documentation of four women running for the House of Representatives, including Cori Bush from my home town of St. Louis, Paula Jean Swearingen from West Virginia, Amy Vilela from Nevada, and (drumbeat) Alexandria Octavio-Cortez from the Bronx. Its True/False reception matched its ecstatic Sundance premiere. In addition, every film at True/False is introduced by a representative from the film, usually the director, who returns for a question-and-answer session after the screening.

American Factory: Directors Julia Reichert and Stephen Bognar, with a huge contingent from the crew, presented a revealing, chilling comparison/contrast, one might actually say culture clash, between the American and Chinese approach to factory work. They were on hand in Dayton, Ohio, when the GM auto plant closed and for its transition to a Fuyao plant that manufactures auto glass. With extensive access to Chinese discussions as well as to American and Chinese workers comments, American Factory offers penetrating insights into disparate approaches and, therefore, conflicts.

Mr. Soul: Exploring an important chapter in African-American television history, director Melissa Haizlip profiles Ellis Haizlip’s inspiration for and guidance of the great 1968 to 1973 American television variety show SOUL. The dancers, musicians, singers, writers and poets Ellis presented and interviewed is a who’s who of the greats, including James Baldwin and Nikki Giovanni. The sounds are so fabulous, it proved difficult to stay seated!

Amazing Grace: If the music in Mr. Soul wasn’t sufficient to get the blood moving, here is Aretha Franklin in 1972 returning to her church where director Sydney Pollack filmed two days of the greatest singing, playing, choir participation, and worshippers’ engagement. This film is magic, put a smile on everyone’s face, and I did notice most viewers jumping around in their seats and leaving with a hop in their step.

I’ll add only one more admirable film, though I could list another six or seven. Midnight Traveler follows Hassan Fazili, his wife Fatima, and their two daughters Nargis and Zahra for three years. Fleeing the Taliban and then on the run, in and out of refugee camps, promised and then denied visas, this is a story of determination, love among the family members, and what’s possible with three cell phones to shoot a movie.

It’s impossible to see all the films, though I’d love to. I also want to praise: Apollo 11, Chinese Portrait, Cold Case Hammarskjöld, The Hottest August Island of the Hungry Ghosts, One Child Nation, Segunda Vez,” and Up the Mountain.

For me the sign of a rich film experience is that it leaves me wanting to see the film again, and for each of these I can’t wait for a second opportunity to immerse myself in the technological and cultural treasures of each.

If all this doesn’t provide sufficient enticement to fall in love all over again with documentary films and the human and world-wide exposure they offer, there are a few screenings with three to five minute “provocations” before the films, all meant to offer more food for thought.

Finally, though really first, the University of Missouri Journalism school partners with the True/False Festival to offer Based on a True Story: The Intersections of Documentary Film & Journalism before screenings start on the Thursday beginning the festival. These sessions feature related topics and, sometimes, include filmmakers giving in-depth insights into their films. This year, for example, one session was devoted to a legal deposition with lawyers and filmmakers cross-examined for a suit brought against an invented documentary film. Another session modeled a pitch process with suggestions on best practices. And another examined What nonfiction writers can teach documentary filmmakers.

The True/False Film Festival, begun in 2004, is a jewel. The documentary films are first-rate, the 960 volunteers knowledgeable and always pleasant, and the art, music, and small-town atmosphere impossible to equal.