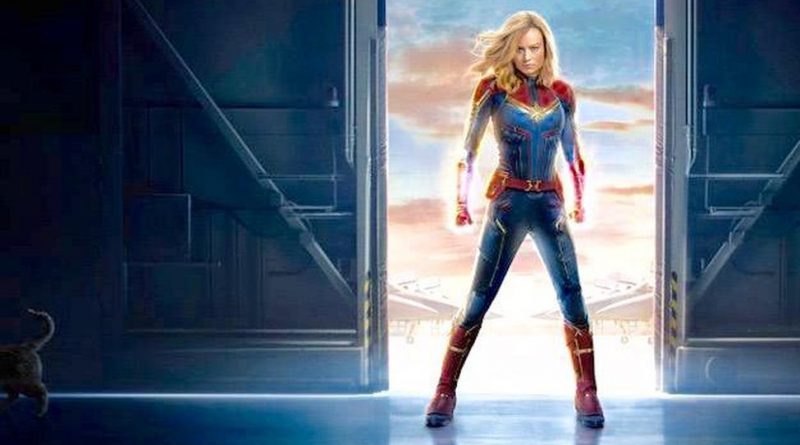 Slam! Bam! Pow! The first female-led installment in the interconnected, ever-expanding Marvel Cinematic Universe is so action-packed that there’s barely room for a coherent origin saga.

On the futuristic planet Hala, Vers (Brie Larson) is a Kree soldier being trained by Yon-Rogg (Jude Law) to control her emotions, instead of shooting powerful photon blasts from her glowing fists.

In the 1995 backstory, Vers crash-lands through the roof of a Blockbuster Video store on C-53, wearing her spandex Starforce uniform, drawing the attention of skeptical cop Nick Fury (digitally de-aged Samuel L. Jackson), who’s an undercover S.H.I.E.L.D agent and devoted to Goose, a ginger cat.

Maria tells Vers that she was Carol Danvers, an adventurous test pilot in an era when females were not allowed in combat: “You know why they call it the cockpit?” And repeatedly warned: “Girls shouldn’t do that,” “It’s too dangerous for you,” or “You’ll get hurt.”

While Larson won a Best Actress Oscar for Room, she’s no Wonder Woman, although she banked $5 million for this as part of a seven-picture deal – $3 million more than Chadwick Boseman made for Black Panther.

Problem is: the use of stunt doubles is all too obvious, and Brie Larson lacks superhero gravitas, looking a bit too much like Buffy the Vampire Slayer.

On the Granger Movie Gauge of 1 to 10, Captain Marvel is an underwhelming, escapist 6 – but stay for two significant post-credit sequences.