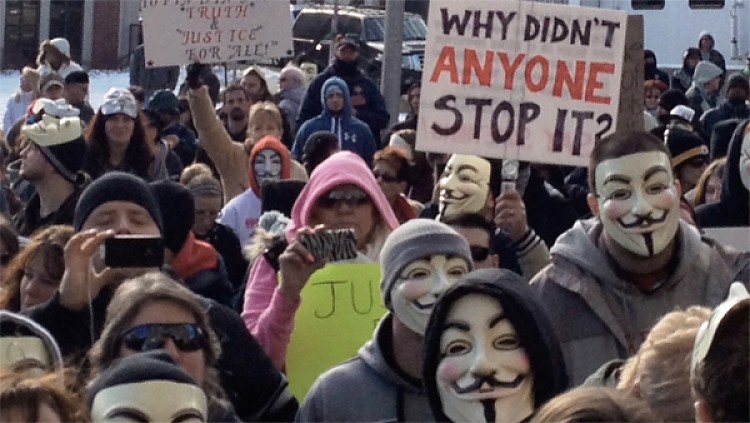 If you’re triggered by toxic masculinity, Roll Red Roll is not the movie for you. But if you’re looking for fuel to feed your fire of outrage in the #MeToo era, Nancy Schwartzman’s documentary fits the bill and then some. Following the infamous 2012 case in Steubenville, Ohio, in which two teen boys assaulted and raped an intoxicated female classmate, the film crystalizes the danger of supporting a “boys will be boys” mentality. 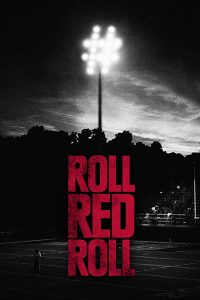 The Steubenville case came to national prominence thanks largely to social media — both because the perpetrators and their friends documented and shared some of what happened on the night of their crime and because blogger Alexandria Goddard (aka Prinnie) wrote about it in a post that ended up going viral. As outrage mounted and calls for justice escalated, the case divided the football-loving Midwestern town in ways that were simultaneously predictable and maddening. Victim blaming and normalization went up against advocacy and allyship.

Even though the perpetrators were ultimately convicted in juvenile court and three adults were also indicted with obstructing investigation into the crime, that doesn’t change the fact that there wasn’t a universal cry for accountability the instant the assault took place. The film makes it very clear that as long as boys grow up thinking it’s funny to joke about rape — and that people of all ages and genders think that if a girl wears a short skirt or drinks too much, she somehow “deserves it” — there will be more Steubenvilles.

In bringing together so many of those involved in this particular incident — including coaches, parents, fellow students, investigators, journalists, and more — Roll Red Roll documents the chilling details of rape culture at work. Here’s hoping that sharing the story of Steubenville with the world helps shut it down for good. — Betsy Bozdech

Susan Wloszczyna: The toxicity of male behavior these days is stinking up the joint that we call our nation. From R. Kelly and Michael Jackson to the Hollywood revelations of the #MeToo movement and even the accusations against our current president and his hush money lifestyle. It hurts to learn that supposedly admirable icons like Bill Cosby failed us utterly, but even worse, that they are protected by those who benefit from not calling out such behavior for so long. Read full review.

Marilyn Ferdinand: Any time I forget how so many people could vote for a candidate who was caught on tape describing how sexual assault is part of his nature, all I’ll have to do is watch Roll Red Roll again. Here, in graphic detail, is a portrait of rape culture in Steubenville, Ohio, a community like so many across the country and around the world that prizes feeling like a winner above all else. Read full review.

Loren King One might recalls the disturbing news in 2012 of Ohio high school football players who allegedly raped a 16 year old girl at a party, and the rush to blame the victim in a city where high school football and its players are prized. But the documentary Roll Red Roll gives a much more detailed and far more disturbing picture of a culture of toxic masculinity in the city of Stubensville, Ohio where many students, parents, school administrators and coaches were complicit in fostering such a hostile climate for young women. Read full review.

Marina Antunes Nancy Schwartzman’s documentary, which revisits the notorious 2012 sexual assault case in Steubenville, Ohio that captured international headlines, feels as urgent and important today as the discussions which emerged when the case was first brought to light. What’s most shocking is that even with all of the notoriety surrounding the investigation and trial and the rise of the #MeToo movement, there are still people in Steubenville who are willing to publicly denounce the trial and verdict. If there’s one here, there are others elsewhere which only goes to show that as a society, we are a long way from overturning the rape culture which has become so pervasive. A heartbreaking must-see.

MaryAnn Johanson Ugh, this is such a depressing film! (Important, yes, but dispiriting nonetheless.) The utter lack of empathy on display, from the perpetrators to the victim’s peers to the entire victim-blaming town, is a harsh reminder of how little our culture cares about girls and women, and how easily — reflexively, even — it excuses the crimes of boys and men. Still, there’s something a little bit heartening in the realization of how recent these events were, and how much it feels like things have changed in a few short years: maybe the cultural conversation around Steubenville then helped pave the way, at least a little, for #MeToo and #TimesUp now. So maybe there’s reason to hope.

Nell Minow: Director Nancy Schwartzman knows that no commentary or condemnation could be as devastating as simply presenting us with the footage of the adults and teenagers involved in the case of the Steubenville high school football players charged with raping a drunk girl. Compelling, infuriating, and utterly urgent, this movie shows that we as a society have failed at the most fundamental level in the messages we send teenagers about how to stay safe, how to respect others, the impact of social media, and how the justice system and news media need to be improved to be more effective and credible.

Sandie Angulo Chen: Roll Red Roll is a must-see exploration of the infamous Steubenville Ohio rape case, in which a small town chose to support prized football players over the Jane Doe they raped. Even viewers familiar with the 2012 case will benefit from revisiting the case and the rape culture which permeated the town of Steubenville. Director Nancy Schwartzman interviews key players (police officers, attorneys, an activist crime blogger, and local residents) and in many cases allows screenshots of social media, audio and video excerpts, and recorded police interviews with the various young men involved in the horrific six-hour incident, to chronicle what happened. All parents and teens should see this documentary and discuss how easily a neighborhood can rally behind perpetrators instead of victims.

Kristen Page Kirby“Rape culture” is one of those terms that can mean something so general that it becomes vague – what is it, exactly, and how do we all (men and women, pop culture, the news media, even the justice system) participate and perpetuate it? Roll Red Roll may not answer all of those questions, but it uses the Steubenville case to nail down specific examples of a prevalent problem. Shocking at times and occasionally angering to the point of nausea, the documentary illustrates how even “good” people can even unwittingly contribute to a poisonous atmosphere.

Sheila Roberts
Filmmaker Nancy Schwartzman’s riveting documentary, Roll Red Roll, examines rape culture and how a criminal case in Steubenville, Ohio gained attention when it was constructed and tried via social media. From Twitter to Instagram to over 400,000 text messages, words and photos revealed the truth and exposed the power of peer pressure in a community more worried about protecting an institution and its players than the victim. Schwartzman’s interviews with crime blogger Alexandria Goddard and local detective J.P. Rigaud provide shocking perspectives that make you question the culture we are living in and the social disintegration on display when two star football players can rape a 16-year-old with a complete lack of empathy, then brag about it and blame the victim. When the case exploded on the web, it provoked a visceral response from the city, attracted major attention from the media, and prompted outraged calls for justice worldwide.

Jennifer Merin Nancy Schwartzman’s harrowing documentary about the rape of a teenage girl by local high school football players in the ‘middle America’ community of Steubenville, Ohio, reveals the depth to which rape culture permeates our society. We’ve seen far too many other such stories — about the rape of girls on campus, of women in the military and the workplace. It must be stopped. Roll Red Roll should be mandatory viewing for every teenager, parent and educator in America. Read full review.

Cate Marquis: Director Nancy Schwartzman’s gripping documentary Roll Red Roll examines a case of rape of an under-aged girl by boys who are members of the high school’s football team, in a small Midwestern town that reveres football. The boys brag about their crime on social media, which brings in the police and the crime is on the way to being prosecuted. In an earlier era, that would have been the end and the rape would have remained a local matter. But the larger world of social media soon took note, and the case blew up in rounds of outrage, victim-blaming and hyperbole on all sides, as the case became part of the national conversation in the #MeToo era. The national spotlight uncovers a larger, toxic situation in the small town. Using interviews, news footage of protesters and clips of the boys’ own videos and screenshots of their texts, the documentary delves deep into “rape culture,” under-age drinking, and the steps to which some adults will go to protect their treasured football legends. Roll Red Roll is a fascinating look inside American culture’s football fanaticism where it meets the power of social media in changing times.