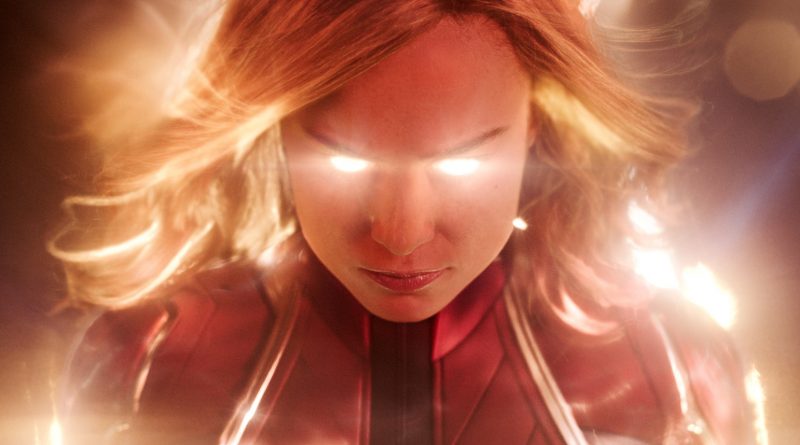 With sturdy performances, supercharged special effects and souped-up wisecracks, “Captain Marvel” soars higher, further and faster than both the standard superhero origin story and the ridiculously lofty expectations on it.

The 21st installment in the Marvel Cinematic Universe, “Captain Marvel” is the first to center on a female protagonist, with Oscar winner Brie Larson (“Room”) delightfully portraying Carol Danvers, the Air Force pilot who gets caught up in an intergalactic war. The movie not only has to winningly introduce one of the mightiest characters in comic-book history, but it also has to do it in a way that feels relevantly feminist without being too militant for mainstream audiences.

Oh, and it has to set up next month’s super-team installment “Avengers: Endgame” as well as its own future sequels, establish crowd-pleasing back stories for fan-favorite characters and navigate a plot that includes both shape-shifting aliens and a time shift back to the 1990s.

That it does it all this with aplomb is another win for Marvel Studios mastermind Kevin Feige’s practice of hiring innovative indie film directors – like “Thor: Ragnarok’s” Taika Waititi, “Black Panther’s” Ryan Coogler, “Guardians of the Galaxy’s” James Gunn – to steer these big-budget action vehicles. Helmers Anna Boden and Ryan Fleck (“Half Nelson,” “It’s Kind of a Funny Story”), who co-wrote the script with Geneva Robertson-Dworet (the “Tomb Raider” reboot), manage the seemingly impossible task of creating a narrative that snaps into the interlocking arc of the MCU while standing on its own and flying in some interesting twists.

The writer-directors eschew the deep-dive origin story and introduce the title hero when she’s already known as Vers, a smart-aleck rookie in Starforce, an elite military team on the planet Hala, the homeworld of the Kree. Under the demanding command of Yon-Rogg (Jude Law), she and her fellow soldiers are dispatched to rescue an imperiled spy from the Kree’s mortal enemies, the shape-shifting Skrulls.

When Vers is captured, Skrull leader Talos (the excellent Ben Mendelsohn) and his crew literally get in her head, mining her shadowy past for memories of Dr. Wendy Lawson (four-time Oscar nominee Annette Bening), an Earth scientist who has developed advanced technology capable of changing the course of the war.

After she crash-lands on Earth in pursuit of the Skrulls, Vers realizes that her disjointed memories hail from this planet, and she teams up with sardonic, still two-eyed S.H.I.E.L.D. Agent Nick Fury (Samuel L. Jackson) to trace both Lawson and her origins, with the occasional assist from earnest S.H.I.E.L.D. newbie Phil Coulson (Clark Gregg). The digital technology used to take Jackson and Gregg back to 1995 is eye-poppingly impressive.

Although it doesn’t have an iconic scene on par with “Wonder Woman’s” crossing of No Man’s Land, “Captain Marvel” features several satisfying scenes of Larson smacking down the patriarchy, including a prescient moment when she doles out a righteous comeuppance on the strange dude urging her to smile and an adrenaline-pumping fight sequence scored to No Doubt’s “Just a Girl.”

The filmmakers certainly have fun with the ‘90s setting, from a cool beans soundtrack also featuring Nirvana, Garbage and TLC to jokes about AOL passwords, slow computers and two-way pagers.

“Captain Marvel” also delivers a fierce feline named Goose, the story of how Nick Fury earned his eye patch, a thrilling mid-credits scene, a funny post-credits stinger and a fitting tribute to the late Marvel guru Stan Lee, all in just over two hours.

Who says women can’t do it all?