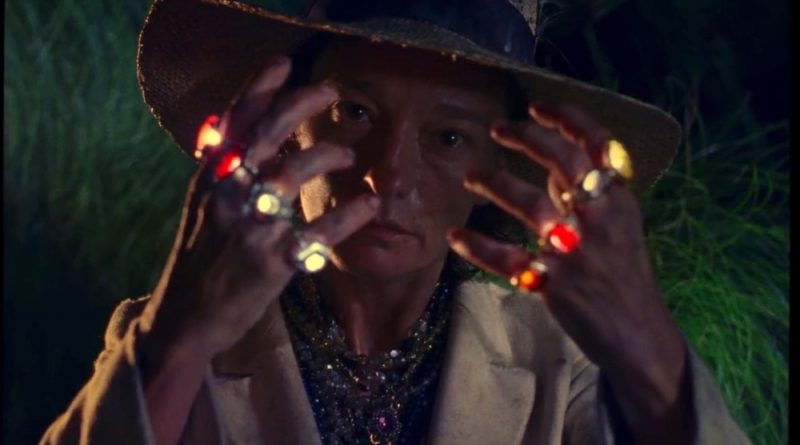 Slowly and steadily, for those who have been paying attention, French filmmaker Bertrand Mandico and Romanian-American actor Elina Löwensohn have become one of the most consistently productive and unrelentingly original collaborative teams working in cinema today. Across their many short films together – including Boro in the Box (2011), Living Still Life (2012), Salammbô (2014), Souvenirs d’un montreur de seins (2014), Our Lady of Hormones (2015), Y a-t-il une vierge encore vivante? (2015), Depressive Cop (2017) and the most recent Apocalypse After (2018) – Mandico and Löwensohn have explored seemingly every nook and cranny of their creative collaborative potential. This is rendered most literal perhaps in 2014’s Prehistoric Cabaret that sees Löwensohn as a burlesque performer who invites the camera explicitly into her insides via a camera colposcopy, declaring “I’ll be your intimate landscape”.

Considering the success of their short film work together, that Mandico’s feature debut would star Löwensohn in an equally memorable performance therefore comes as little surprise. As indicated by their first short together Boro in a Box – Mandico’s perverse and beautiful love letter to the Polish master of art and sex films Walerian Borowczyk – Mandico and Löwensohn have long sought to explore the creative possibilities of human sexuality in their work, making the terrain explored in Mandico’s feature directorial debut The Wild Boys (Les Garçons Sauvages, 2017) perhaps less audacious in its conceptual foundations than it might be to someone altogether new to his and Löwensohn’s work.

Löwensohn has more than established an impressive career on her own merits outside of these incandescent experimentations with Mandico. With her more mainstream work including credits in everything from Schindler’s List and Seinfeld, she is perhaps most readily associated for her many collaborations with Hal Hartley and Michael Almereyda. In France, she co-starred with Marc Barbé in Philippe Grandrieux’s cult film Sombre (1998), reuniting with Barbé more recently in Hélène Cattet and Bruno Forzani’s experimental reimagining of Italian spaghetti Western and poliziotteschi films, Let the Corpses Tan.

Yet it is arguably with her many collaborations with Mandico over the last eight years that Löwensohn’s talents have soared the highest. While the audacity of the premise of The Wild Boys might not seem out of character when taking their past work together into account, this does not by any means negate from its impact. Consciously exploring gender fluidity both within its own internal narrative universe and in its casting, the five title characters of The Wild Boys are – first and foremost – all played by young women.

With beautiful, dreamy cinematography that evokes a nostalgic netherworld reminiscent (but hardly derivative) of Guy Maddin in particular, the film tells the story of these eponymous ‘boys’ condemned to the care of a hyper-macho Dutch sea captain after they rape and murder their school teacher. It is with him that the young ‘men’ find themselves on a strange island whose natural landscape itself bubbles away with a provocative, almost human sexuality. Spawned from this eroticized, sensual landscape is Löwensohn’s jewel-loving, gender-fluid Séverin/e, whose arrival helps set the movie towards its frankly indescribable climax.

Like Borowczyk, Mandico has seemingly little concern for whether he might be pushing the limits of sex and violence too far and falling into exploitation territory. Rather, it is precisely the boundaries between good and bad taste, high and low art – as much as those between traditional gender binaries of ‘male’ and ‘female’ – that, he seeks to actively collapse. For those open this kind of cinematic queering (not only of his characters, but of film form itself), in The Wild Boys Mandico and Löwensohn more than live up to the promise of their previous short film collaborations.