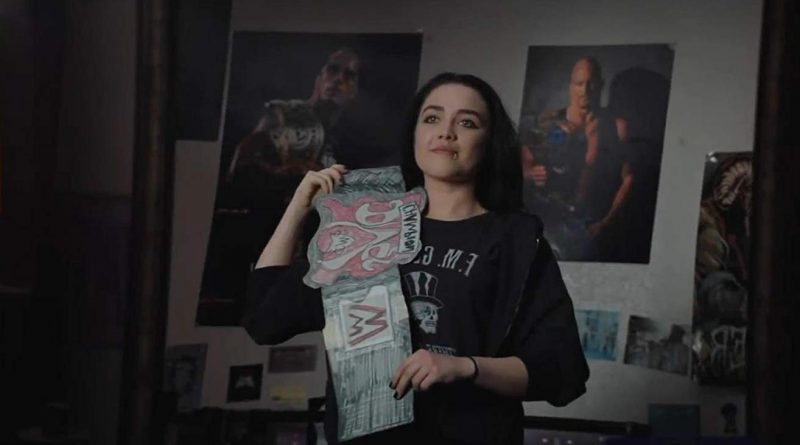 At first, Saraya wasn’t really interested in joining their troupe but, after an exhibition bout with her ambitious big brother Zak Zodiac (Jack Lawson), she became enthused.

As Saraya and Zak set their sights on the WWE, heading for tryouts in London, they have a chance encounter with Dwayne “The Rock” Johnson, who urges them not to try to imitate anyone else; instead, he advises them to be themselves.

Talent scout/coach Hutch Morgan (Vince Vaughn) is interested in promoting 18 year-old Saraya – but not Zak, which causes a bit of a family crisis since despairing Zak has a wife (Hannah Rae) and new baby.

Goth-girl Saraya then rebrands herself as Paige, named after her favorite character played by Rose McGowan on TV’s Charmed.”

When Paige arrives at the WWE’s NXT training facility in Orlando, Florida, she faces not only loneliness but also disillusionment, discovering that her fellow recruits are conventionally sexy blonde, bikini-clad models/dancers: ”We’re just tits and ass, right?”

Wrong, apparently, since Paige struggles to keep up with them during Basic Training, facing various physical and psychological challenges. Meanwhile, back home, her family also grapples with change.

According to producer Dwayne Johnson, he immediately identified with the story of this often-dysfunctional wrestling family. So his Seven Bucks Productions hired writer/director Stephen Merchant (co-creator of the British version of “The Office”) to develop the often predictable, triumph-of-the-underdog concept.

On the Granger Movie Gauge of 1 to 0, Fighting With My Family is a simplistic, yet solid 6, a scrappy smackdown.