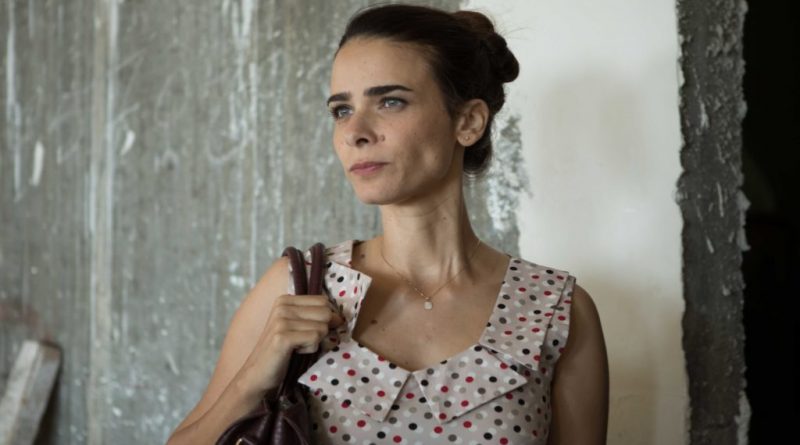 This quiet, powerful drama about one woman’s experience with sexual harassment in the workplace eloquently details its insidiousness and why such behavior is so destructive to a woman’s career and self-esteem.

Israeli filmmaker Michal Aviad is best known for her documentaries but this feature shows her skill at escalating drama and subtle character building that begins as soon as we meet Orna (Liron Ben-Shlush), a young married woman with three kids and bills to pay. As her husband Ofer (Oshri Cohen) struggles to get their new restaurant off the ground, Orna lands a job with major Israeli real estate developer Benny (Menashe Noy). She learns quickly, and her dedication and people skills soon make her valuable at selling expensive waterfront apartments. The older, married Benny seems nice enough at first and appreciative of his high-high-achieving employee but soon there are inappropriate comments and inconsiderate demands. Although she’s uncomfortable, Orna brushes these indiscretions off. She wants to keep her job and she believes Benny when he says it won’t happen again.

Of course it does. Noy is excellent at revealing Benny as a entitled, powerful guy who sees nothing wrong with his behavior. On the surface, he’s charming. But there’s a subtle pleasure he gets from making Orna uncomfortable. The action builds to a business trip in Paris where Orna lands a major deal for the company then, unexpectedly, there’s a physical assault in a hotel room. This scene is staged with cringing discomfort; one can feel Orna’s embarrassment, confusion and self-loathing.

While one may wish for retaliation, or a call to the police, “Working Woman” is realistic in detailing the complexities of incremental sexual harassment. Orna is psychologically and emotionally rattled by the experience, full of misplaced shame and remorse. She doesn’t tell Ofer until much later, and her inability to absolve herself results in Ofer misdirecting his anger at her. In one of the most poignant and devastating scenes in the film, Orna sits at a typewriter to compose her own letter of recommendation since Benny refuses to provide one. As she lists her numerous professional skills and accomplishments, we see how shaken her confidence is, how the experience has undermined her sense of self.

The film offers a satisfying conclusion that fits what we know of Orna. There is a sense of justice at the end, but also a sense of grief. Orna is no superhero; just an ordinary, smart woman who was trying to do her job well. “Working Woman” realistically depicts the commonplace-ness of sexual harassment and, without preaching or resorting to melodrama, shows why women can’t or don’t simply leave their jobs or report a harasser.