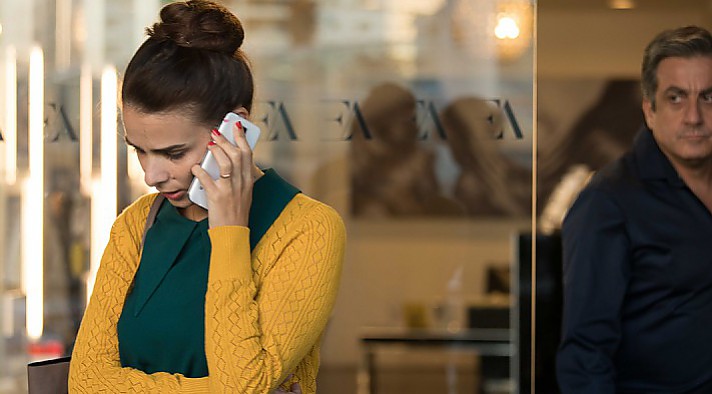 Timely and authentic, Michal Aviad’s drama “Working Woman” will resonate with any ambitious woman who’s ever found that success on the job is accompanied by unwanted sexual attention from a male supervisor/co-worker. So, you know, every ambitious woman. 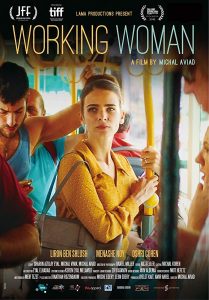 Smart, talented Orna (Liron Ben-Shlush) — who has three kids and a husband (Oshri Cohen) who’s struggling to get his new restaurant off the ground — is excited and delighted when real estate developer Benny (Menashe Noy) offers her a job as his assistant, even though she’s never worked in the business before. She’s thrilled that he’s recognized her desire to work hard and learn a new profession and is determined to succeed. And she does, splendidly, proving to have a knack for sales and the ability to get problems dealt with.

So she’s all the more dismayed when Benny’s interest in her proves to be less professional than she’d hoped — especially when it continues past her initial, very clear rebuffs and eventually crosses all possible boundaries. Orna’s family is depending on her (even though her husband also resents her success and questions her motives), so she has to handle the situation with the sharp intelligence and savvy that she’s been developing on the job.

Ben-Shlush delivers a strong performance as a relatable mom/wife/woman who knows she has what it takes to do well and just needs the right opportunity to prove it. And the fact that Orna doesn’t quit the first time anything untoward happens is proof that Aviad and her fellow screenwriters know exactly how the world works. Like so many of her sisters before her, Orna internalizes her struggles and excuses away unacceptable behavior because she knows that she’d probably have to face the same issues anywhere. Her arc toward action — and agency — what makes “Working Woman” a powerful contribution to the growing ranks of #MeToo cinema. — Betsy Bozdech

Loren King This quiet, powerful drama about one woman’s experience with sexual harassment in the workplace eloquently details its insidiousness and why such behavior is so destructive to a woman’s career and self-esteem. Read full review.

Susan Wloszczyna: Working Woman is a sadly familiar #MeToo movement lesson from feminist Israeli director and co-writer Michal Aviad. What she gets just right is the dicey tightrope that ambitious females often face when a manipulative man used to getting his own way, sexually and otherwise, stands between them and their career goals. Read full review.

Marilyn Ferdinand: Israeli director Michal Aviad has been telling women’s stories and representing women’s points of view since she released her first film in 1987. With her latest film, Working Woman, Aviad focuses on today’s hot-button issue: sexual harassment in the workplace. Her protagonist, Orna (Liron Ben-Shlush), is given a chance to break into real estate sales and development by Benny (Menashe Noy), a man she knew from her national military service. She excels at her job, and her salary and quick promotion to a commissioned position provide much-needed support to her struggling family. Thus, when Benny starts sexually harassing her, she finds herself conflicted about her feelings of accomplishment and financial need and her deep distress over being violated. Aviad avoids sensationalizing sexual harassment by spending most of her time on the everyday lives of her characters and how Orna’s growing emotional anguish forms cracks that spider through every aspect of her life. Her approach makes Orna’s experience ordinary, relatable, and that much more shocking because we realize how common and ruinous such trauma can be.

Sheila Roberts Israeli filmmaker Michal Aviad’s beautifully nuanced Working Woman stands out for its realistic yet subtle portrayal of the insidious nature of sexual harassment and its impact on a bright young woman (Orna/Liron Ben-Shlush) who aspires to get ahead for the sake of her family. Her powerful new boss (Menashe Noy) is impressed by her intelligence, good instincts, and positive contributions to his organization. He quickly promotes her, but her well-deserved advancement comes at an intolerable price. Aviad skillfully explores the impact of unwanted sexual advancements on Orna’s life as she tries to keep her boss at arm’s length while continuing to work to support her husband’s (Oshri Cohen) failing business. We see how Orna struggles to put into words what has happened to her, to deal with the guilt that perhaps she brought it on herself, and to reveal the truth to her husband who feels betrayed. Working Woman is well written and directed and features solid performances by all. In this timely film that was in development before the Me Too movement existed, Aviad reminds us that we are all human beings, and that while sex is wonderful, it should happen when both parties desire it. Orna attempts to reclaim her former life and sense of self-worth, but Aviad’s ending is tinged with sadness and shows us there is still much work to be done.

MaryAnn Johanson This is a movie that, I suspect, only a woman could make: It’s so sensitive to the impossible dilemmas women are put in by sexual harassment and sexual assault, particularly at work, where we are extra vulnerable. (Who can afford to walk away from a job?) Women don’t need to see this movie: we live it… though of course it’s always reassuring to be reminded that we are not imagining things when dealing with manipulative, gaslighting, predatory men, and that we are not alone. No, it’s *men* who really need to see this movie in order to begin to try to appreciate just how incredibly stressful navigating the world as a woman can be, and how fine a line we sometimes have to walk in it.

Elizabeth Whittemore Working Woman is about as relevant a film as possible in this #MeToo era. The film is thoughtfully shot and the writing feels so natural that it takes the audience on a journey of discomfort and anger right alongside our leading lady. Working Woman allows anyone that has been fortunate enough to avoid being harassed, or even assaulted, in the workplace to experience the skin-crawling feeling that oftentimes puts a victim between a rock and a hard place. It’s a visceral thing. There is no denying this film is about power. The final scene will play very differently for each viewer and will undoubtedly spark debate. That’s great filmmaking.

Pam Grady: A young wife and mother learns more than the ropes of the real estate business when she takes a job in her old Army commander’s firm in Michal Aviad’s astute, enraging drama. It is not enough that Orna (Liron Ben-Shlush) turns out to be a crackerjack saleswoman of her developer boss Benny’s (Menashe Noy) seaside condos. But she’s an attractive woman and Benny demands more than just that she excel at her job. Working Woman is a powerful depiction of sexual harassment and assault in the workplace and its fallout: the delicate situation it puts Orna in as she realizes she can’t get another job without Benny’s recommendation, stress on her marriage, and a failure of the self-confidence that allowed her to excel at her job in the first place. Ben-Shlush is terrific at portraying Orna’s roiling emotions in a situation that may take place in Israel but can–and does–happen anywhere in the world.

Jennifer Merin Working Woman is the first narrative feature from well-known Israeli documentarian Michal Aviad, who also co-wrote the screenplay with Sharon Azulay Eyal and Michal Vinik. The femme-centric plot revolves around Orna, (Liron Ben-Shlush), a middle class woman who has a husband and three young children who are financially dependent upon her. Orna is charming and smart, and life begins to look rosier when she lands a real estate job with benefits, bonuses and prospects for promotion. Problems arise, however, when her new boss (formerly her commander in hermilitary service) feels he’s entitled to ‘benefits,’ too. She needs the job, so she politely dodges his uninvited and discomforting advances — until he assaults her. Then, when she can no longer tolerate working for or with him and leaves his employ, he prevents others from hiring her. Orna’s determination to use all of her charm and smarts to find her way to assure her family’s well-being and to restore her own severely damaged sense of self-esteem is inspiring. The plot is not new, but this Israeli film gives us another cultural reference for a problem that continues to plague women world wide. It’s release has #MeToo timeliness. Working Woman is beautifully crafted, the performances are superb and there are some subtle and interesting storytelling twists that keep you completely engaged — and rooting for Orna.

Cate Marquis In the compelling drama Working Womana young Israeli woman’s joy at being offered a promising career opportunity changes when she learns that sexual harassment is part of the price. Read full review.