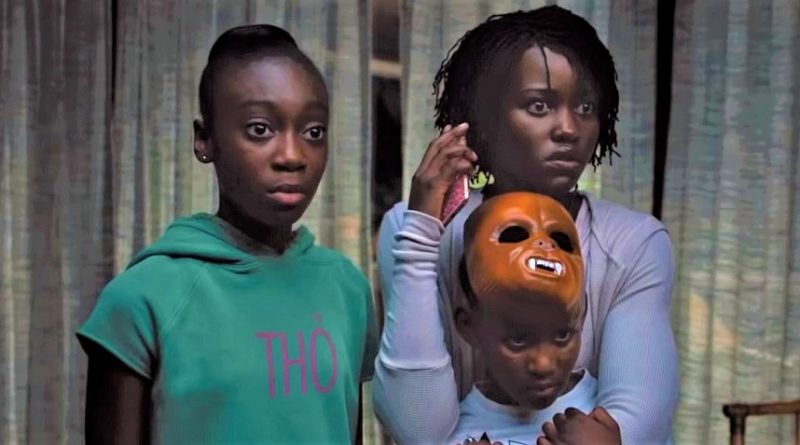 In 1986 at California’s Santa Cruz beachside amusement park, young Adelaide (Madison Curry), clutching a candied apple, has a terrifying experience after wandering into an eerie ‘funhouse of mirrors.’ It’s so traumatic that she’s never discussed it – with anyone.

Back home that night, a menacing family of four, clad in red jumpsuits and carrying huge scissors, suddenly appear in their driveway, trapping the Wilsons inside. It turns out they’re the Wilsons’ zombie-like, tethered doppelgangers.

Adelaide’s covetous twin has lived a life of surreal misery, so she and the others have come to un-tether themselves. Fleeing to the home of friends/neighbors (Elisabeth Moss, Tim Heidecker) only causes more brutal carnage.

The twists and turns continue to an ultimate ‘reveal,’ the creepiness enhanced as the line between music and sound effects gets blurred.

Fond of sinister Biblical references, Peele features a homeless man holding a sign: “Jeremiah 11:11,” referring to an Old Testament passage about a covenant between God and the people of Israel, perhaps connecting to the clones that reside in tunnels underneath Earth’s surface.

Inspired by a the suspenseful Mirror Image episode of the Twilight Zone TV series, writer/director/producer Jordan Peele notes, “I realized I’d never seen a horror picture where there’s an African-American family at the center, and it’s not about race. After you get over the initial realization that you’re watching a black family, you’re just watching people.”

On the Granger Movie Gauge of 1 to 10, Us is an insidious, unsettling 8. It’s nightmarish.