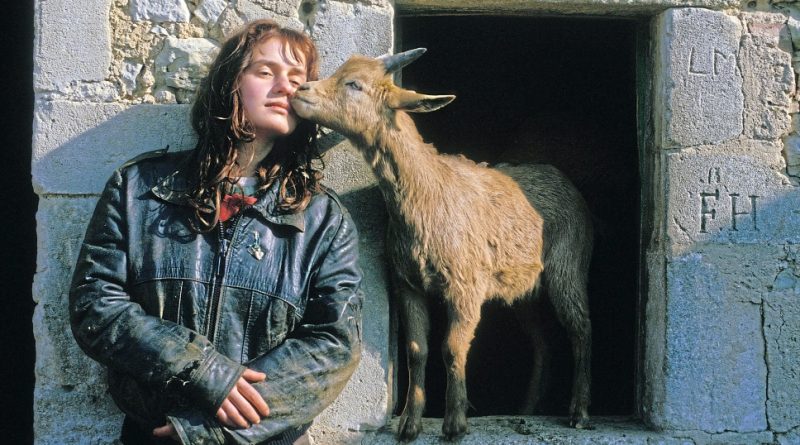 Agnès Varda was one of the grand dames of international cinema who has shown a consistent interest in the detritus of life. Her 2000 documentary, The Gleaners & I, examines the historical practice of gleaning the remains of harvests from the fields where they fell and then broadens it to include the salvaging of any refuse. Going back 15 years from this diverting, meditative documentary is Varda’s documentary-like masterwork about another type of refuse, the mysterious and sad Vagabond. In this film, Varda examines the world of social castoffs by focusing on a young woman named Mona.

We first meet Mona (Sandrine Bonnaire) in a ditch, where she has frozen to death. Her story unfolds as an unseen narrator (most likely Varda herself, perhaps attempting to explain a real death of just such a girl) cuts in to tell us how she investigated how this vagabond touched the lives of a number of people in the winter of her death, using interviews and imagined flashbacks of the scenes they related.

Mona takes anything that is offered to her, steals what isn’t, shacks up in any available shelter or camps in her tent, and hitchhikes to nowhere in particular just to keep moving. She meets all kinds. A philosophy professor who has dropped out to go back to the land offers her a camper behind his farmhouse; when she says she thinks she might like to grow potatoes, he gives her some land to tend. Naturally, her musings on becoming a potato farmer are as shallow as the trash she strews in the camper is deep. He kicks her out. She moves on, hooking up briefly with a do-gooder agronomist, a Tunisian farm worker, the maid of an old woman who becomes jealous of her when she expresses interest in the maid’s callous boyfriend, and finally, a man who aspires to be her pimp.

A trucker, who picked her up and dropped her off just as fast when she complained that he had no radio in his hunk of junk, called her a drifter. This seems a more accurate description of her than vagabond, which has a carefree sound to it. Mona is on the pretty side and can laugh and smile, but she doesn’t seem carefree. In fact, she seems terribly careless. Nothing really seems to matter to her but subsisting. Her pleasures are marijuana and music. Sometimes she has sex, but we don’t know if it’s for fun or money. We don’t know a lot about Mona, or even whether the information she gives to the people whose path she crosses is true, only that she refuses to do anything to pull herself out of her outsider existence. When it appears that the Tunisian plans to take care of her, she briefly seems to perk up. When he is forced to put her out, she storms defiantly, knowing she won’t take care of herself and no longer believing someone will do it for her. This is when her slide toward death begins.

Sandrine Bonnaire plays the surly, filthy Mona with equal parts audacity and vulnerability, a cipher the people she met projected fantasies onto or tried to sum up, perhaps only to please the person asking about her. Mona is the everywoman homeless person, unusual only because she was a woman traveling alone; she remains essentially anonymous and unknowable, like the rest of her tribe, to be forgotten in due time because every encounter she had was brief. When I asked my husband, who has spent time on the streets and working with the homeless, his reactionto the film, he said, “Honestly, I thought, ‘there goes another one.’” So many people are lost, and we barely notice. In making this film, Varda has ensured that its viewers will remember—if not understand—at least one of them.