When word spread over social media the morning of March 29 that film director Agnes Varda had passed away, the heartache was palpable. For seven decades, Varda has been a primary voice for women and independent filmmakers. Her death wasn’t a surprise; Varda was 90 after all. But she was still making challenging, one of a kind films and. to the world of cinema, she was ageless. Director Guillermo del Toro on Twitter called her “The youngest soul I have ever met.”

Varda is credited — but only recently — for launching the French New Wave with La Pointe Courte in 1955. That she didn’t get her due along with Godard, Truffaut and other male directors was blatant sexism; women directors were rare in the 1950s. But who else would have made the short Diary of a Pregnant Woman in 1958? Or the still influential, still imitated Cleo from 5 to 7 (1962)? Who can forget the pleasure of seeing a truthful film about female friendship with One Sings, the Other Doesn’t in 1977? She kept turning out personal, powerful masterpieces, right up to the celebrated Faces Places (2017), which won three AWFJ EDA Awards, among numerous other accolades.

But what made Varda such an icon was that her cinema and her life were inextricably linked. She was a pure filmmaker who made films her own way, with passion, humility and joie de vivre. And whether it was a documentary or a scripted film, she put women’s lives front and center from her first film to her last.

What a legacy to leave us. What a fearless, fully present way to live. Agnes Varda you will always be monumental in our collective memories — Loren King 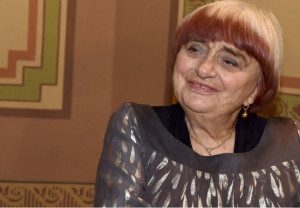 AWFJ salutes Agnes Varda and celebrates her life and work with this collection of tributes and reviews by members of the Alliance of Women Film Journalists:

THE BEACHES OF AGNES – Review by Jennifer Merin

THE BEACHES OF AGNES – Review by Erica Abeel