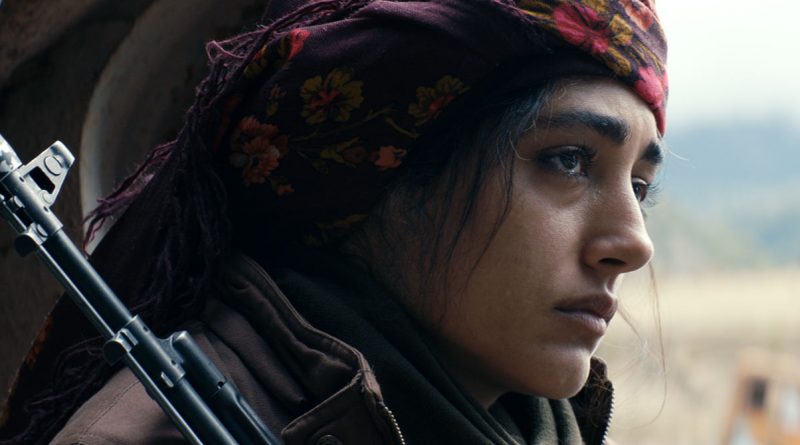 A better translation of the French title would have been Daughters of the Sun as these are clearly not girls but fierce fighting women who are as tough or tougher than any men.

The eye-patch-wearing journalist Mathilde, played by Emmanuelle Bercot, is based on the real American war correspondent Marie Colvin, who was played by Rosamund Pike in the recent excellent biopic A Private War. In this film, the journalist is French but it is clearly Colvin,

The real focus of the film, however, is not the journalist but the Kurdish woman at the head of this group of relentless fighters, Bahar, played well by Golshifteh Farahani. In fact, the all-women troupe often boldly take the lead while the more cautious male Kurdish leaders hang back, “gathering information.” The women have a song they sing as a comrades in arms, with a chorus about fighting for “women, life and liberty.”

The narrative is built around the relationship between the two women, the soldier and the journalist. As we follow the women on their missions, there are periodic flashbacks to Bahar’s pre-war life and her harrowing experience as a captive. The two-track approach gives the audience insights on the kinds of appalling abuse heaped on these women by ISIS as well as their fierceness as fighters.

Golshifteh Farahani is remarkable as the leader of the women fighters, seeming to shift effortlessly from the cold, calculating soldier as she efficiently leads the military missions to a vulnerable woman haunted by the losses of the past. Her expressive face shifts from cold determination when carrying out a mission to tenderness soothing a dying young comrade. In quiet moments, she is a woman in pain, remembering her husband and son, whose names are tattooed on her arm. She is guarded at first with the Western journalist but as her respect for Mathilde grows, the two become close. Bercot does a fine job as the journalist but this is really Farahani’s film.

Girls of the Sun is a powerful, unblinking drama about the horror of war, offering a unique female-centric view into a conflict that ravaged so many.