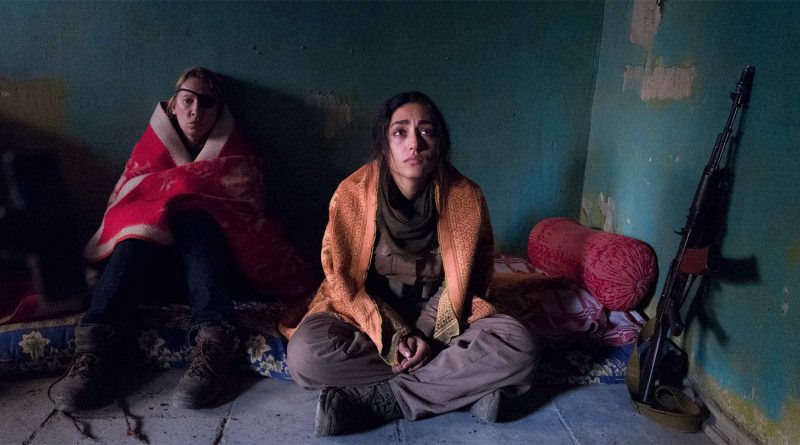 Anyone who craves big-screen depictions of strong females defying victimhood and stereotypes as they rise up against men who oppress, abuse, rape and torture women in times of war will find value and emotional sustenance in director Eva Husson’s Girls of the Sun. That is in spite of the fact that this tale inspired by Iraqi and Syrian women who escaped their Islamic fighters and kidnappers while becaming warriors is a bit of a muddle as flashbacks and-current day scenes fail to fully blend into a coherent narrative that could benefit by a more propulsive edit and a less noisy and pounding musical score.

That said, it is intriguing to see women in the heat of battle while wielding guns to take out the enemy. As veteran French war reporter Mathilde, Emmanuelle Bercot fills a typically male role as she flaunts her eye patch – the result of shrapnel and a testament to her devotion to getting the truth out there – and nails the world-weariness of her profession. But she can’t hold a candle to the main reason to see this somewhat flawed film – Iranian actress Golshifteh Farahani as Bahar, the mesmerizing and fearless leader of an all-female Kurdish battalion of former captives turned warriors as they attempt to take back their village.

Her natural beauty is secondary to her bad-ass commitment to her mission, as seen in three scenes that are standouts: A taut and tense sequence as she silently leads the way through an underground tunnel where the enemy could be around any corner; another where she answers the ringing cellphone of a man she just killed and tells the male caller that his brother won’t be ascending into paradise because he was killed by a woman; and when one of her soldiers is about to go into labor as escape is nigh and she tells off a male escorting them to safety who gripes about the infant’s arrival, “You can explain to the baby that its timing is bad.”