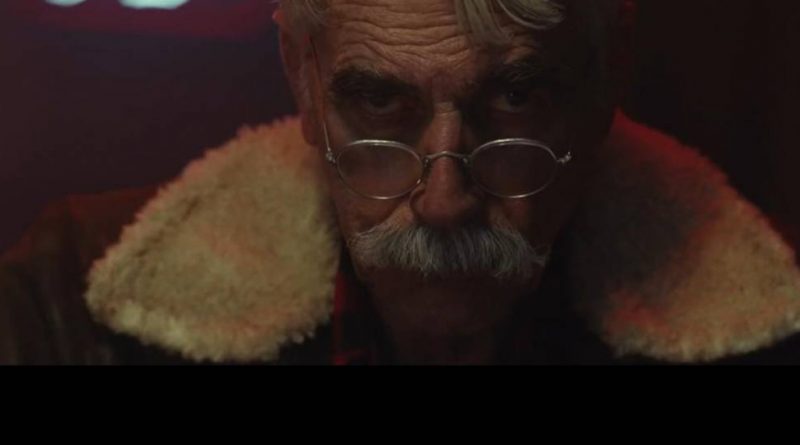 Catching my attention with the most bizarre title I’ve seen in years, this inventive action/adventure follows the epic adventures of an American legend that no one has ever heard of.

During World War II, Calvin Barr (Sam Elliott) remained anonymous although he was actually the soldier who shot The Fuhrer. Quietly living out his retirement years in a small Northeastern town, along the Canadian border, Barr’s constant companion is his golden retriever.

He often recalls the moment when his aptitude for languages and knowledge of ‘40s-era weaponry led him to the fateful spot where he killed Adolf Hitler, whose “ideas continued to do their damage without him.” (In episodic flashbacks, Barr is played by Aidan Turner, familiar to TV audiences from Poldark).

Barr still mourns the loss of the love-of-his-life, a schoolteacher named Maxine (Caitlin FitzGerald); his only friend seems to be his gregarious younger brother (Larry Miller), the town’s barber.

But when a series of homicides occur nearby, Barr is recruited by an FBI agent (Ron Livingston) and a Royal Canadian Mounted Policeman (Rizwan Manji) to use his remarkable tracking ability to serve his country.

His mission: to kill the mythical Bigfoot, a creature infected with a deadly virus that could devastate mankind. That leads Barr to, once again, question society’s concept of heroism.

On the Granger Movie Gauge of 1 to 10, The Man Who Killed Hitler and Then The Bigfoot is a strange 6, focusing on a stoic superhero.