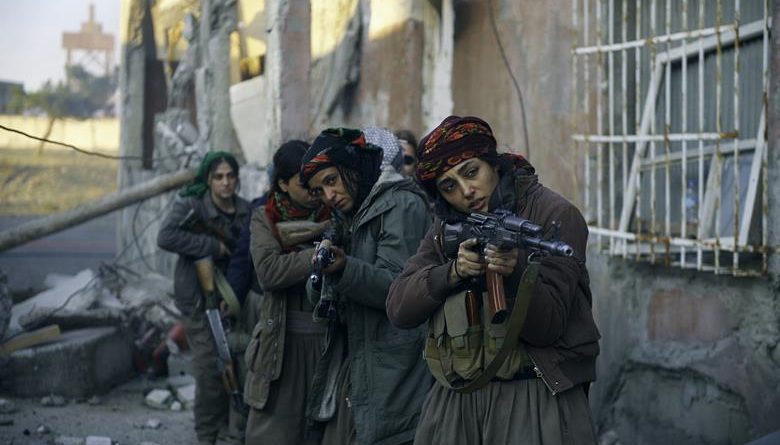 A determined mother prepares to battle an extremist regime in desperate hopes of finding and rescuing her young son, who was torn from her by the same oppressors who turned her into a sex slave. No, it’s not The Handmaid’s Tale — it’s director Eva Husson’s powerful Girls of the Sun, which is based on all-too-real circumstances in present-day Kurdistan. 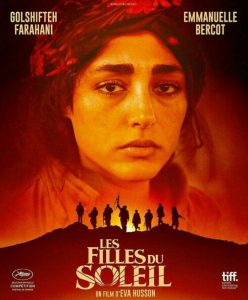 Golshifteh Farahani stars as Bahar, the leader of a battalion of fearless Kurdish women who’ve learned how to fight and won’t stop until they’ve freed their village, no matter what it takes. Scenes of the women planning for and embarking on their mission are intercut with flashbacks to their lives before and during the extremists’ takeover. We see how regular women — mothers, wives, sisters, friends — became rifle-toting soldiers with a single-minded goal of liberation.

The film’s structure is effective. Like Mathilde (Emmanuelle Bercot), the veteran French war-zone journalist who joins the battalion to observe and document their mission, viewers learn to care deeply about Bahar and her fellow fighters as their stories gradually unfold. Husson’s ability to build tension — both in the flashbacks and in the present-day scenes — is impressive, and our investment in her characters (she co-wrote the screenplay) makes the stakes feel even higher.

Farahani is gripping in the film’s central role; her Bahar is intense, loyal, daring, and focused. She cares very much for the women she leads, but she also knows that their mission is bigger than any one of them. They must succeed, no matter the cost, because children’s lives depend on it. And for a mother like Bahar, nothing else matters more than that. Girls of the Sun may be a war movie, but its empathy and compassion are what win the day. – Betsy Bozdech

Marina Antunes We’ve seen stories of women seeking vengeance in the past but few are as powerful as the tale captured by writer/director Eva Husson in Girls of the Sun which tells the story of a battalion of Kurdish women, all former hostages, who escape only to return to hell only this time, they’re in control. The women fight back, quite literally, by arming themselves and going to war against ISIS. The film features gorgeous cinematography from Mattias Troelstrup and an unforgettable performance from Golshifteh Farahani.

Nell Minow: The commitment and understanding of the women who band together in the midst of tragedy and chaos is touchingly portrayed in a rare film that shows the experience of women in armed conflict.

Sheila Roberts French filmmaker Eva Husson’s Girls of the Sun is a fictional work drawn from the testimonies of real Kurdish and Yazidi women who were kidnapped, raped and brutalized by ISIS when the terror group invaded Iraq and Syria. The visceral film reveals the vile treatment they received at the hands of their captors and how they made a dangerous decision to escape and fight back. Read full review.

Loren King Girls of the Sun mixes the immediate power of contemporary news footage with a story of women bonding in the most horrific conditions: on the front lines of fighting ISIS in northern Kurdistan. Read full review.

Susan Wloszczyna: Anyone who craves big-screen depictions of strong females defying victimhood and stereotypes as they rise up against men who oppress, abuse, rape and torture women in times of war will find value and emotional sustenance in director Eva Husson’s Girls of the Sun. Read full review.

Elizabeth Whittemore This narrative gets its power from a perfect combination of cinematography, editing, music, and performances. The strength of women who continue to battle, both physically and emotionally, is portrayed through the stories of a two mothers during wartime, one a soldier and one a war correspondent. Tragedy fuels some while it destroys others. Girls of the Sun utilizes flashback scenes to propel it’s real-time narrative which occurs over only a few days. The “how we got here” aspect is vital to the palpable emotional stronghold. It is not a pleasant film to watch (story wise), so be fair warned. It displays unending brutality but it is 100% worth your attention. Women are not usually the subjects of war films so this is a bright spot among the majority male driven story lines we usually see on screen. This fictionalized story based on true events is merely another example of how women’s opinions are cast aside when it comes to military strategy. Men have had us at war since the beginning of time. Perhaps let a woman lead for a change.

MaryAnn Johanson I’m not sure it entirely works as a film, but do we need a portrait of mordern women soldiers fighting for their nation and their families? Yes, we do. And the notion that eye-patched Marie Colvin has created some sort of iconic standard for women war correspondents? Hell yes.

Jennifer Merin French director Eva Husson’s second feature is a deeply affecting narrative that centers around a battalion of Kurdish women warriors who’ve survived brutal abuse from the extremest men of ISIS who control their town. They go into battle to restore order and sanity to their war torn and disrupted lives. Based on extensive research and interviews with women survivors who actually lived through this ordeal, the film incorporates the personal stories of several of the women soldiers and shows their camaraderie. Husson’s staging of very realistic battle scenes brings you up close to the dangers the women warriors face. Golshifteh Farahani gives a brilliant performance as battalion leader Bahar. The inspiring message here is that women who are caught upinthe horrors of terrorism and war need not let circumstance sweep over them without fighting back.

Cate Marquis Girls of the Sun is a powerful, unblinking drama about the horror of war, offering a unique female-centric view into a conflict that ravaged so many. Read full review.

Title: Girls of the Sun